The dark skies and rainy clouds shadows all the sunlight from coming in my bedroom. I woke up saddened by the news of Michael Jacksons death. He died at the age of 50.

I couldn't believe what mum was telling me, she took it so lightly. I went out and watch the telly where they were announcing the cause of death. Flashing images of the king of pop were splashed all over the news. His legacy will never end. He created the moonwalk and taught white people how to dance.
He sold the most album, 'Thriller' ever.
He is known for his trademark black shoe and white socks. With ever so fancy costumes.

He is one of a kind, a unique gem.

This is how he should be remembered and thought of. 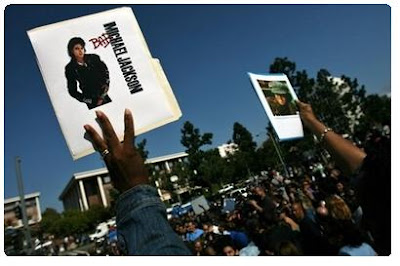 Even after so many decades in the music/entertainment industry. Michael manage to maintain an ever growing line of fans. A musical phenomenon.

I grew up listening to him and dancing to his songs. I can even do the Thriller dance! Not forgetting Beat It. I teared listening to the devastating news about his death. I cant believe he is really gone. He cant be!

My condolences to his family; may our well wishes be with you.