I got no idea why, but i'm into black white dark things nowadays.
no, i'm not being an emo kid.
Just a feeling you know? 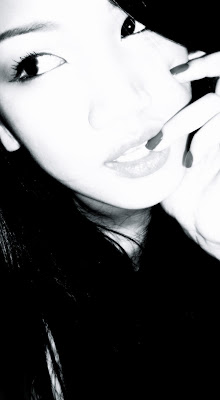 Like for example *other than having really spooky evil thoughts* , Nouvelle Vague's Psyche.
& I even manage to scare the shit out of myself , I couldnt sleep till 6am!
ohmygod.
uhm, btw I just downloaded Dead or Alive's ; You Spin Me.
Its my bimbo tune now, lol.
I know, you're prolly thinking ; why the fark is she being so random.
lolol.
x
& i'm on some rollercoaster moodswing(s) now, farkkk.
The day was up and down, literally.
Met up with babycally at The Curve, did some bank in and errands.
Had some ber-bonding time at The Library.
Wanted to drop by Ikea cause I love exploring and playing around with their stuffs lol.
Its like an adult playground, get what I mean? Harhar.
Anyway we couldnt make it because we went to get our hair done.
Headed off to Kota D's for Entranze grand opening.
Missed the lion dance, but they had dancers performing after that.
Me, Cally, SarnyFarny and Abigail play card games/drinking games, uhms.
Left and had supper at Mano Mega Curry House with the bunchies (Cally, CH, Abbie, Ravin, Sarny, LV)
So like , yeaaa.
Anyway saw this on someones facebook page, got me think for quite some time.
Try to solve it if you can (:
Cause I cant and i'm cracking my head for answers, argh. Its driving me insane!
3 person went for dinner. When they finished eating, they kindly asked for the bill ; the total was $25. Each of them paid $10 which brings the total to $30. They received a balance of $5. Then each of them took back their respective $1 and the balance of $2 was given as tips.
So the question is, if each person paid $10 and took back $1 (which brings the amount of $9 per person paid for their meal). Now lets do the math, $9 x 3 = rm27 ; Plus $2 as tips = $29. Where did the $1 go?
Manage to figure it out?
Drop me a comment if you know the answer!
much loves, xx.
Email Post