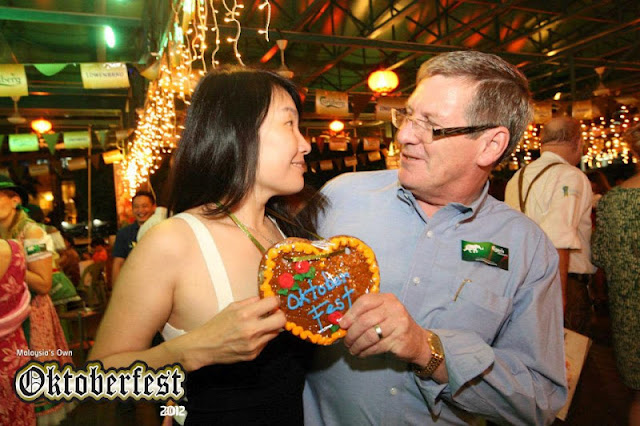 What is Malaysia’s Own Oktoberfest you ask? 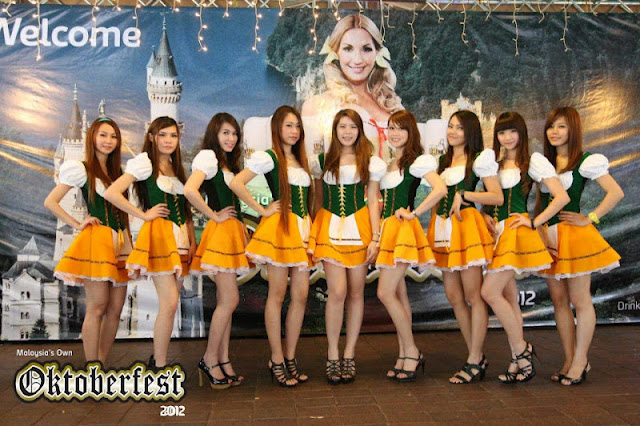 Yes, I know some of you might still be wondering. What is this festival that is so widely celebrated? Why do I see pictures everyday of beer, food and girls? How do I get involved?

Well, its Malaysia's Own Oktoberfest!
First and foremost, it is presented to you by the one and only Carlsberg.
and these lovely maidens (below), are decked in dirndls. Which is the traditional German dress, well if you plan on attending your very own Malaysia's Own Oktoberfest event, it wouldn't hurt to know a wee bit more! Trust me, it'll add on to the fun factor (: 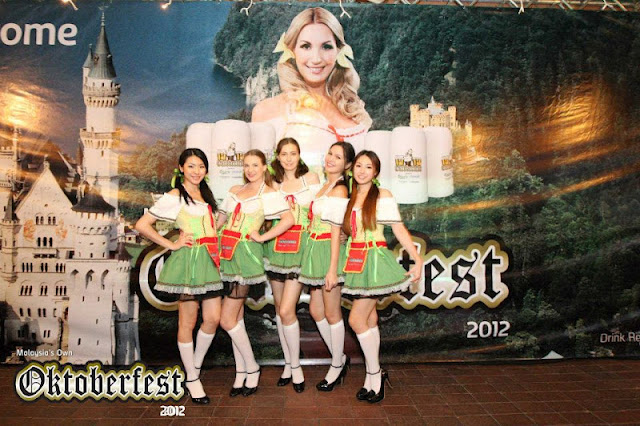 Every year, Carlsberg presents, their very own version which is called "Malaysia's Own Oktoberfest" just to enable consumers experience first-handedly, authentic German beer drinking festival locally. How cool is that? Since we can't go to the party, well not all of us can afford that right, so the people at Carlsberg is bringing that to us! 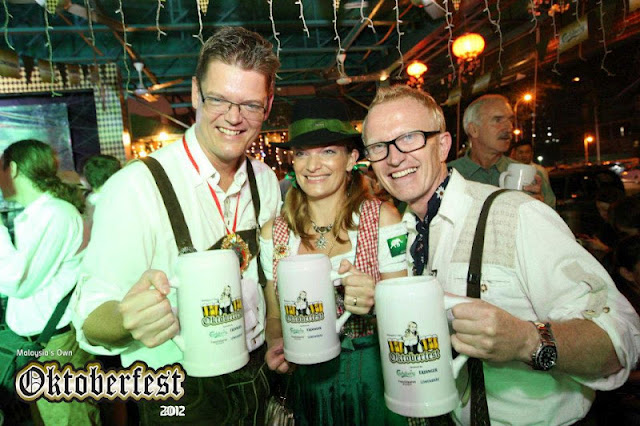 Malaysia's Own Oktoberfest runs from September 26 to October 7, at 18 key market squares throughout the city cities in Peninsular, and for the first time extending to East Malaysia. Yes people, get ready to have your city invaded by beer-lovin' peeps!

So few nights ago, I had the privilege of attending the Launch of Malaysia's Own Oktoberfest held at Hakka Restaurant, Kuala Lumpur. 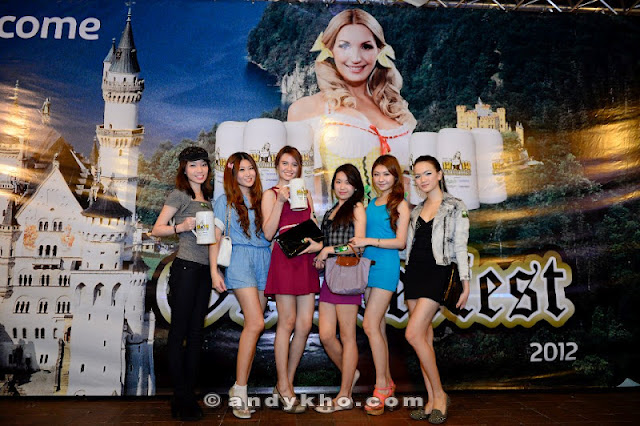 I was so excited to be there that night, cause as I remembered I always had fun during Oktoberfest! What more, when all the girlfriends are there to celebrate together! All of us were so ready with our mugs of beer and filling our tummy with yummy yummy food. We wondered what are the dishes going to be like tonight as it's a Chinese restaurant but German festival hmmm. 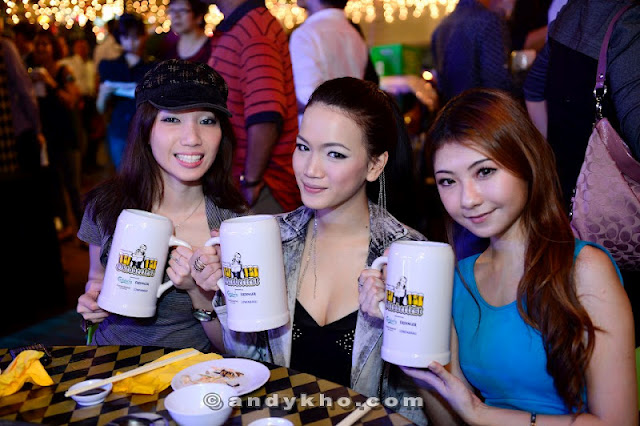 Naomi, myself and Chloe with our mugs of Carlsberg.
It's pretty heavy if you're wondering heh. 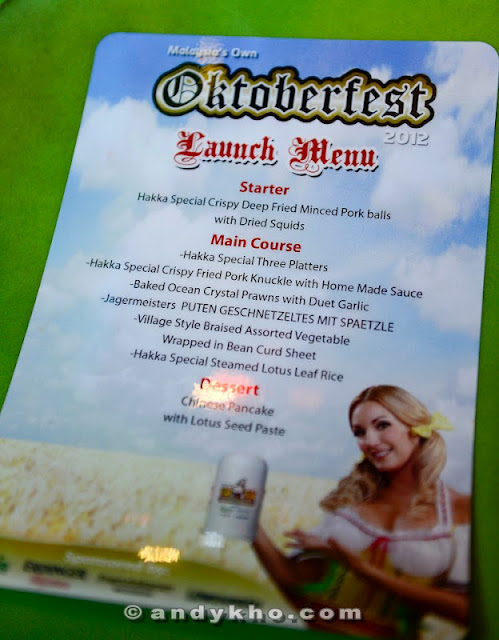 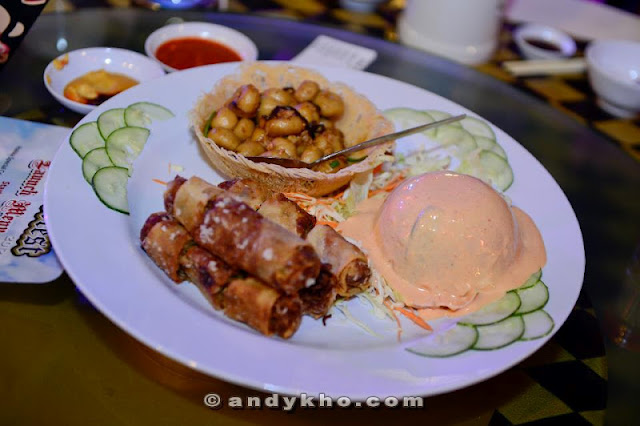 Well, the food kept coming and it was all laughters and fun in the air of good fun!
Best part of beer festivals is that you bump into a lot of familiar faces, especially people you haven't seen in a long time. 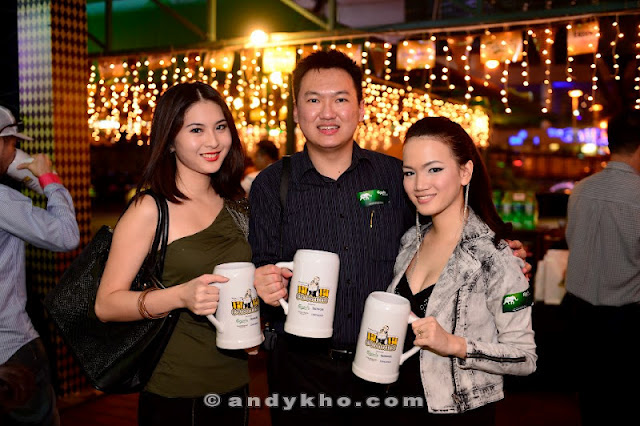 The party was officiated with the launch of “Malaysia’s Own Oktoberfest 2012” when a keg was rolled out for the first “tapping” of beer as traditionally practiced at the centuries old Bavarian Oktoberfest in Munich. 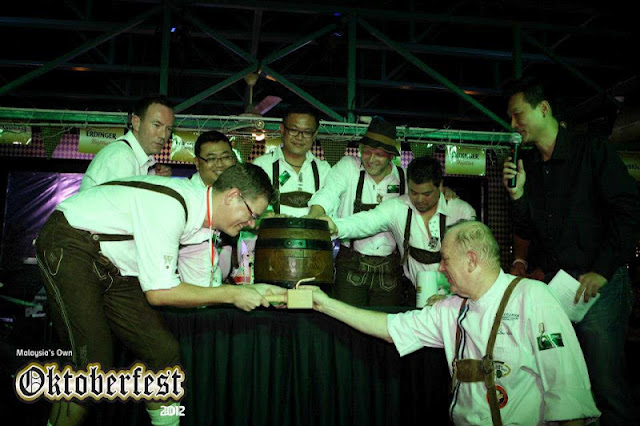 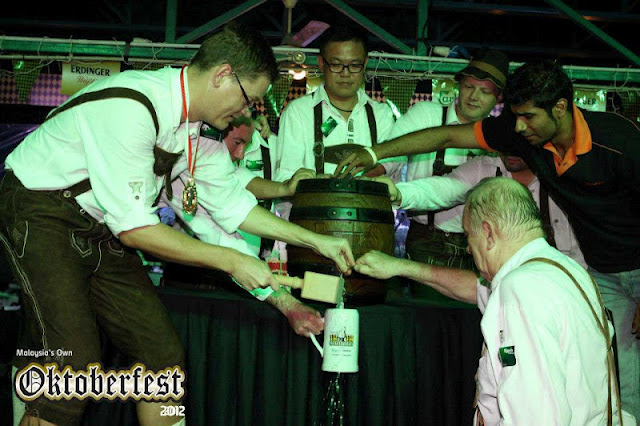 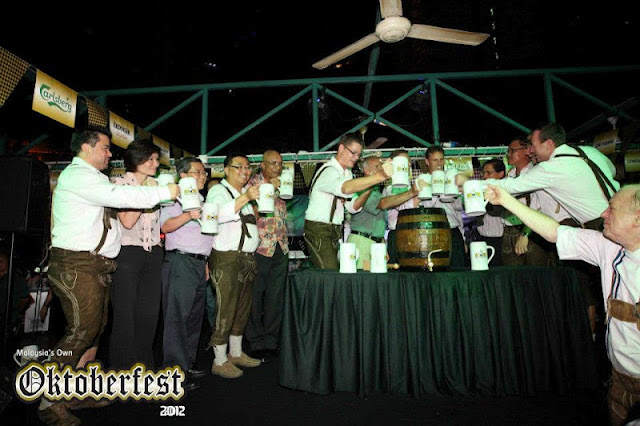 And so the festival finally begins!
PROSTTTTTT!

So the Malaysia's Own Oktoberfest continued on with a demonstration by Chef Johern Kern.

German Chef Jochern Kern did a cooking demo of an Oktoberfest's platter named “Puten Geschnetzeltes Mit Spaetzle” which we all got to try later on! It was a yummy mixture of mash and meat, couldn't really place my taste buds on it. 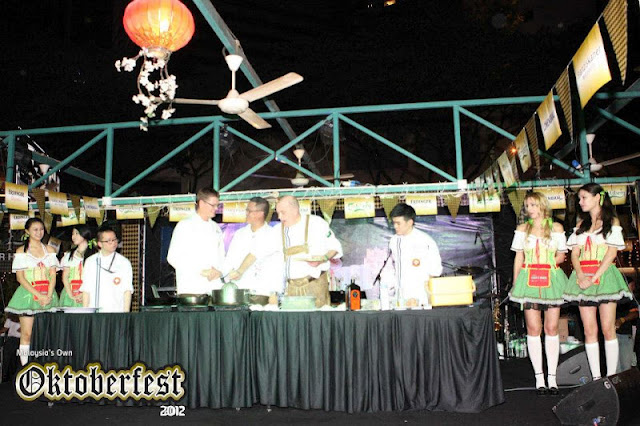 Then the MD of Carlsberg Malaysia, Soren Ravn and GM of Luen Heng F&B Sdn Bhd got up on stage, trying their hands on making sausages on the spot! They were assisted by the 10 ravishing Miss Universe Malaysia Finalists of 2013.

The crowd watches on, with free flow of Carlsberg, and as well as the three other famous authentic beers, namely, Erdinger, Franziskaner and Lowenbrau, the mood escalated to an exciting level. 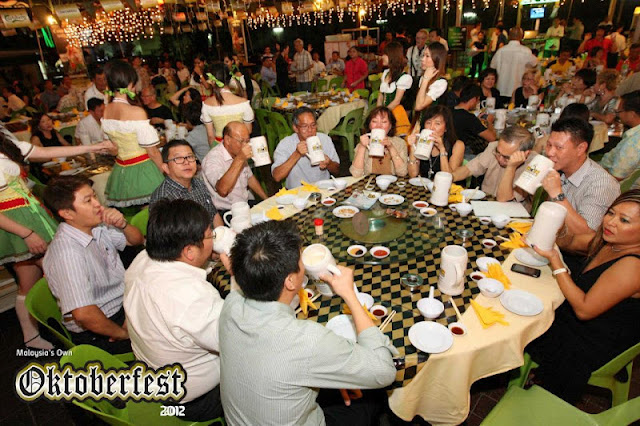 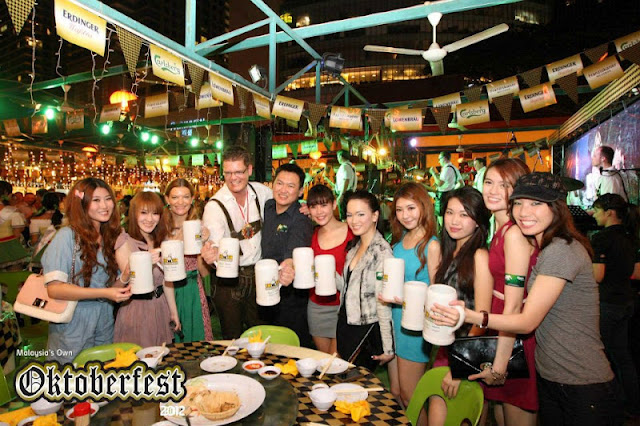 And like how the Germans do it, PROSTTTTTT!
Okay, that's cheers in German, since I've kept repeating it.

Heheh, you can see all of us with our huge mugs of beer.

Another thing at Malaysia's Own Oktoberfest is the games and activities they organize to keep everyone interacted and of course, to build up the fun as the night goes on! 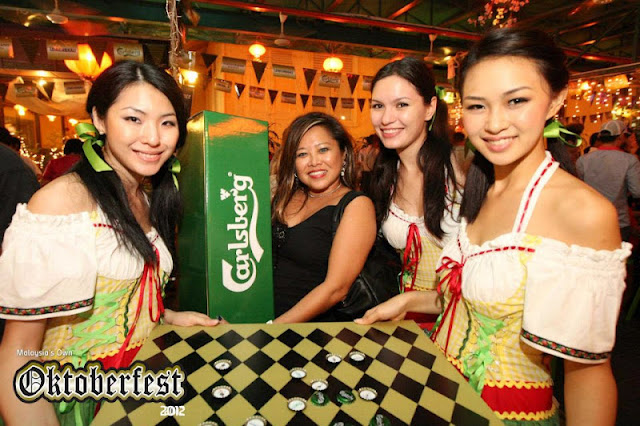 Stand a chance to win yourself a Carlsberg beer tower to bring home with you, or MORE MUGS!
The mugs are a collectible if you may ask me ; every year is a different one. And its all so cute!

Everyone should be aware of Responsible Drinking.

Carlsberg Malaysia has been deploying employee/ambassadors to distribute brochures and encourage consumers to test their BAC (Breath Alcohol Content) as part of its efforts in increasing knowledge and awareness amongst consumers on the significance of responsible drinking. 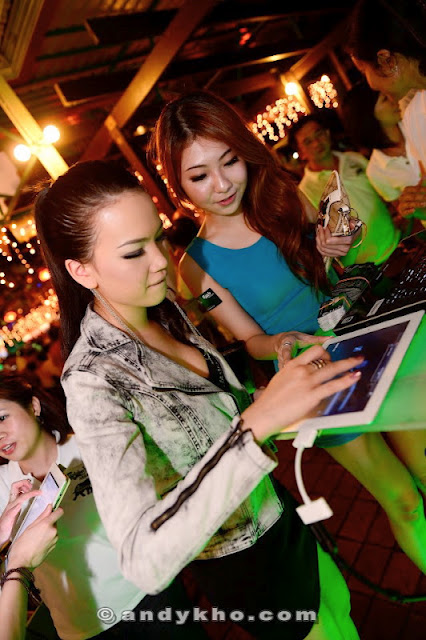 We also played the Drunk Man game ; helping a drunk 'animated' man walk straight is very very tough /:
Though we managed to snagg two breathalyzers for ourselves! Now we get to perform the test on our own before we take the wheel after a night of drinking, thanks Carlsberg!

We had live performances by an authentic Umpapa band from all the way from Germany who definitely hyped up the mood throughout the night. 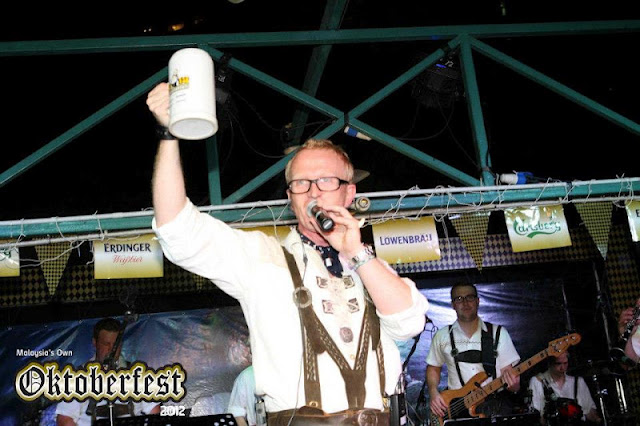 Carlsberg gave away Oktoberfest hats too.
Reminded me of the sorting hat from Harry Potter hehe.
SO CUTE! 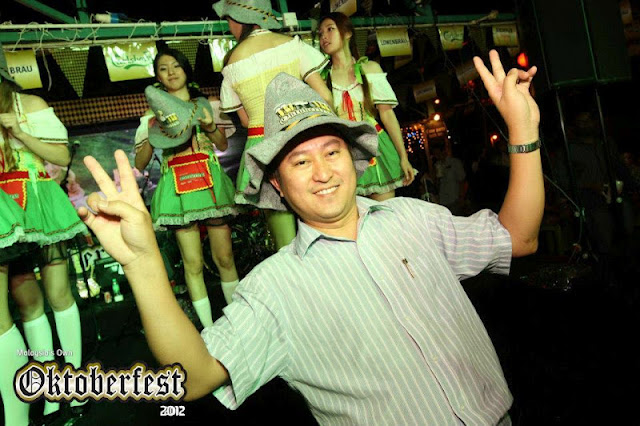 And of course, we had performances by Mr Soren himself rapping along Shawn Lee's beatboxing.
It was definitely a show stopper! I am sure that the guest were all amazed by Shawn's beatboxing techniques and of course, Mr Soren rapping haha. 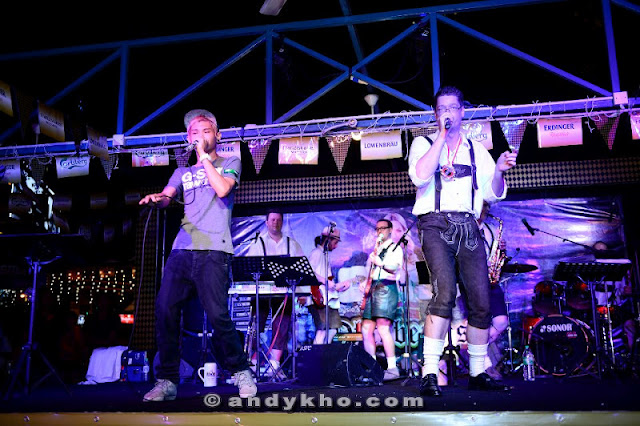 AND OF COURSE, THE INFAMOUS CHICKEN DANCE!
everyone, be prepared for this. It is addictive, and fun! I was definitely shy that night, but everyone was having so much fun doing it, laughing away and you gotta keep up with the tempo. From an average pace music, till it slows really down, and then it just shoots up really fast, try to keep up! You might end up laughing so hard your tummy hurts hehe. 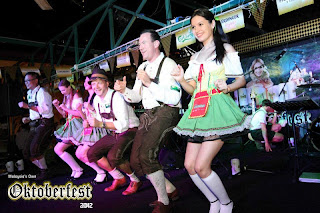 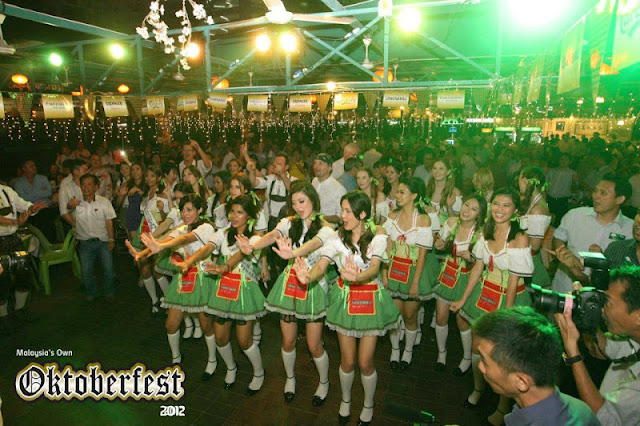 Its a tradition! You will see this at every Oktoberfest, so join in with the crowd!

A special promotion to commemorate the event has also been launched where consumers can take home a limited edition Oktoberfest beer stein (mug) when they take part the promotion at participating outlets. So make sure you get yours, and show them to your friends (: I'm pretty sure many would ask where you'd get it from. 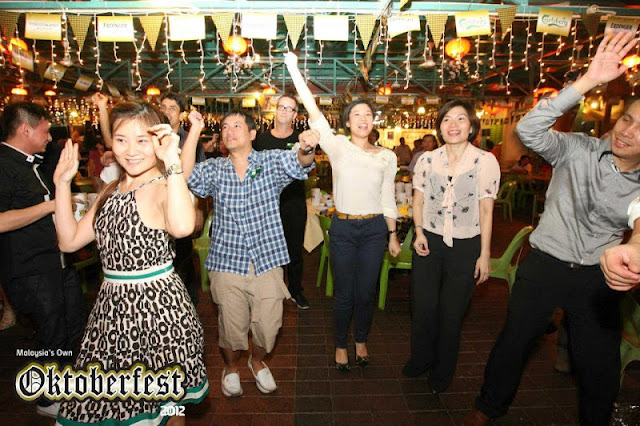 Take note of the beers available at Malaysia’s Own Oktoberfest :

Carlsberg (5% ABV/ alcohol), a lager beer founded by J.C. Jacobsen in 1847 and is an international beer originating from Denmark.

Erdinger Weissbier (5.3% ABV), pioneered in the 70′s, was the first German wheat to be distributed nationwide in Germany. Erdinger is brewed according to traditional recipes and has no preservatives, additives and pasteurization, complying with the Bavarian Purity Law 1516.

Franziskaner Weissbier (5% ABV), a traditional Bavarian wheat beer with more than 600 years of history, is refreshing and aromatic in character. This Bavarian beer is naturally cloudy and copper-coloured and enhanced with a sweet malt taste with a smooth creamy texture for finish.

Lowenbrau, (5.2% ABV), an original “German Munich Beer”, is famous at Oktoberfests. It is a lager beer that is refreshing with a taste of malt and mild hop bitterness. The beer is light to the taste, bright golden yellow in colour, and truly complements the Bavarian drinking experience. 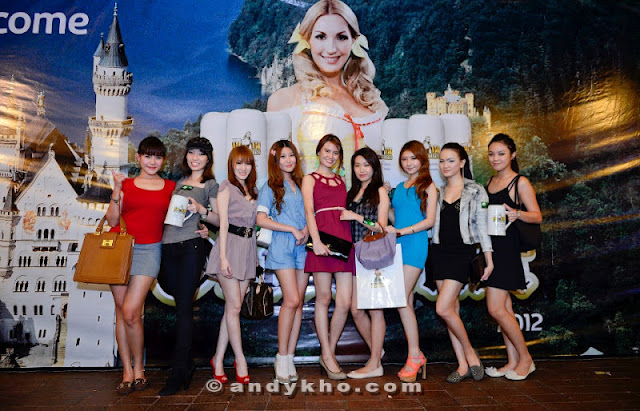 Well us girls at MHB definitely had our fair share of fun!
Check us out at our page :
https://www.facebook.com/myhotbloggers
for more pictures! 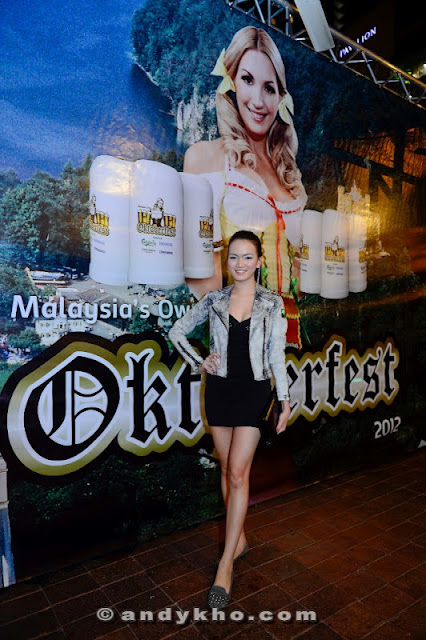 Hope to see you guys at the next venue of Oktoberfest!

A BIG REMINDER, ITS ONGOING! so check out Malaysia's Own Oktoberfest Facebook page for more info and don't miss out (: