"Live your style. Follow your dream. Because you're the one who knows you best. Be tough. Be cute. Be cool." -- Baby-G.

I'm sure many of you readers are aware of my previous Baby-G #OOTD post and I am sure many of you are ecstatic to know that Baby-G has signed Korea's leading female pop group Girls' Generation as the face of their Baby-G Advertising Campaign. Each group member embodies the three different identity of Baby-G watches; tough, cute or cool.

K-pop fever has taken over South East Asia and indeed the rest of the world in the last few years, and South Korean girl group Girls’ Generation has become a familiar name to young Malaysians of all races.

Girls' Generation are made up of nine female members namely, Taeyeon, Jessica, Sunny, Tiffany, Hyoyeon, Yuri, Sooyoung, Yoona, and Seohyunake. The group shot to early stardom with hit songs like "Into the New World" and "Kissing You" but it was in 2009 that they took South Korea by storm with their hit single "Gee".

There was no turning back from there on as the Girls’ Generation began to conquer the Korean music industry with follow-up singles "Tell Me Your Wish" or better known as “Genie”, "Run Devil Run", and "Oh!". Due to online media platforms like YouTube, they also started to garner fans from across the region with millions watching their videos.

In 2011, they returned to the Korean music scene with "The Boys", which was released in three languages: Korean, Japanese, and also, English. Girls’ Generation have sold over 100,000 copies for each of their six Korean releases, and impressively within five years after debut, the group has sold a total of over 4.4 million albums and 30 million digital singles.

This group of empowering girls have become fashion icons in their own rights not only in South Korea but throughout Asia and so it’s no wonder that Casio Computer Co. Ltd. signed Girls’ Generation as the face (or rather faces, haha) of a Baby-G advertising campaign that began in July 2012!

Started off in 1994, Baby-G is Casio’s watch brand for young and trendy women which inherits the toughness of the shock-resistant Casio G-SHOCK watches and ever since then, the basic shock resistance and superior waterproof performance of Baby-G has evolved with additional features and higher performance, including solar-powered systems and neon illuminators.

The various Baby-G designs not only carries the latest fashion trends but also allows different individual expression with limited edition models available every now and then, and are available in a rich spectrum of colours making Baby-G watches a highly versatile fashion accessory.

Girls’ Generation as a highly versatile girl pop group whose members not only sing, but also appear as models and actresses on TV, in commercials, and in films, is the ideal match for the Baby-G brand. They are also known as SNSD among their fans (who are called ‘Sone’) the group is adaptable yet tough, active, sporty, healthy, beautiful and complemented by the individuality of each of the nine members’ fashionable lifestyles.

Here I am with my own Baby-G watch: 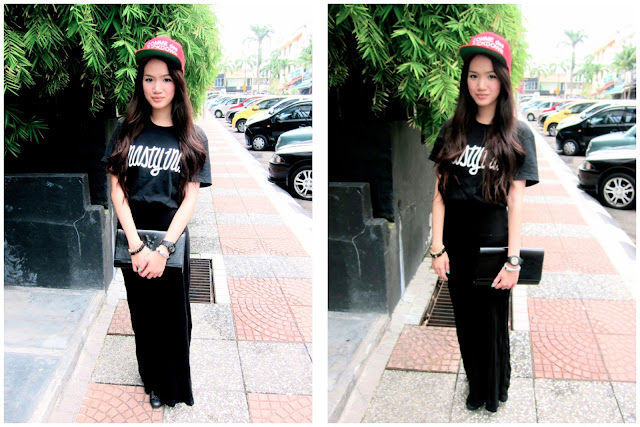 The modern design of these Baby-G watches makes matching them with your own personal style an easy task.
Furthermore, it's durability and water resistant makes it so much easier as it's been raining these few weeks in Kuala Lumpur! Imagine running under the rain with one less thing to worry about (;

Every Baby-G watch comes in an ultra-cute packaging!
These metal cases not only provides a proper place to store your new Baby-G watch to keep it pristine and clean but it also doubles up as a coin or jewelry case if you want it to.

This trendy black watch is under the Cool range (model no. BGA-153-BDR).
With a timekeeping function, countdown timer, stopwatch, an alarm function, and also world time.
It is also water resistant as mentioned above and also shock resistant which means, Baby-G watches are resistant from superior shock and vibration which stands up to the toughest conditions you can imagine.
I also love the detailing on the watch, though it is in black, the gold trim and edging around the dials just gives it that touch of femininity, toning down the harshness of the color black.

Something else stood out for me, it was the strap on Baby-G watches, why? Cause I have really skinny wrist, I can't wear big or bulky watches 1# because it will look weird or sticks out like it doesn't belong on my wrist or 2# some watches can't be altered or shortened. Hence, it gets really hard for me to look for perfect fitting watches. But as I have noticed, the straps on Baby-G watches have just the right amount of 'holes' for me to find that perfect fit, a fit where the watch rest nicely on my wrist.

You can now own your very own Baby G timepieces which are available at authorised retailers across Malaysia and at G Factory outlets located at:

Make sure you get your own piece of these beautiful, fashionable, unique looking watches! You'll surely love it. It's trendy, affordable, reliable and Baby-G (Casio) watches are known to last very long. I still remember my very first watch and it was a pink Baby-G, and now I am a very proud and also happy owner of the latest Baby-G watch. Do head over to one of the retailers listed above to get your very own pair, start a collection!

Do check out the MHB girls in their very own timepieces!
https://www.facebook.com/myhotbloggers