Trip to Macau last December.
My first time to Macau so I didn't really expect much. Never really hear much about Macau other than gorgeous casino, milk teas and chinese food. 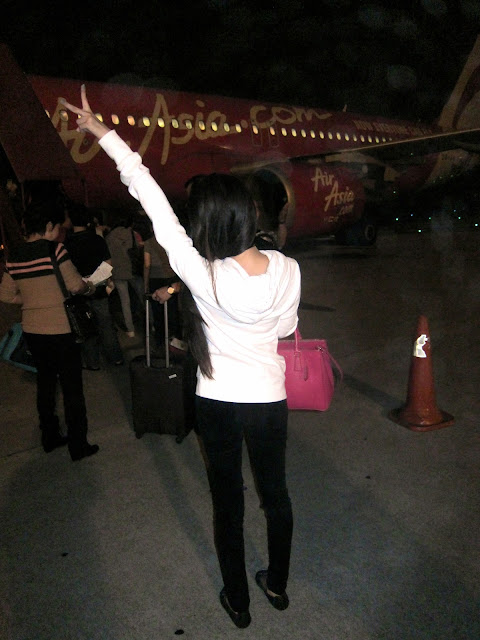 Nevertheless headed to the airport in the wee hours of the morning. It was surprisingly cold for like the first time in Malaysia. Seriously chilly and foggy too, must be from all the rain we had back in December. 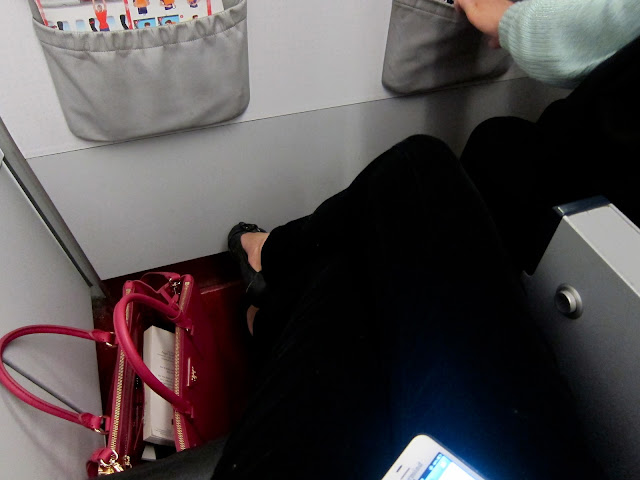 I like the extra leg space but I really don't get why daddy loves paying extra for seats. I hate how now, the first 3-6 rows from the front are all considered 'hot seats' nothing 'hot' about rows 2-6 -.- Luckily we got the first row, I hate cramping and people reclining their chairs back.

Some must haves in my bag! A book to read, headphones and iPod. 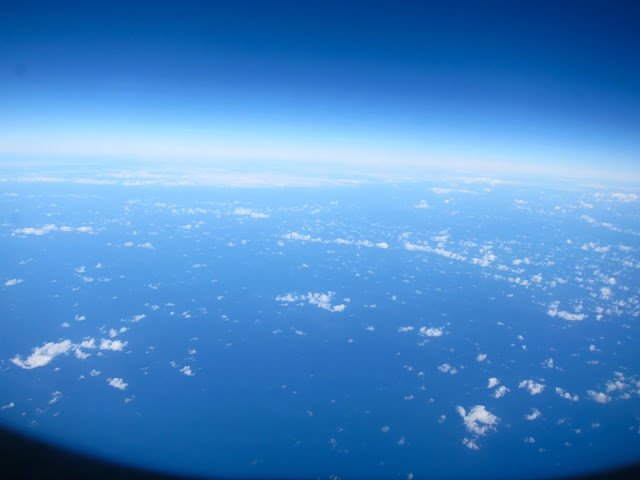 Surprisingly I had a great sleep throughout the flight, the weather god must've been good and granted us a smooth journey. Finally we landed, and from the airport itself I could see a few buildings afar already. 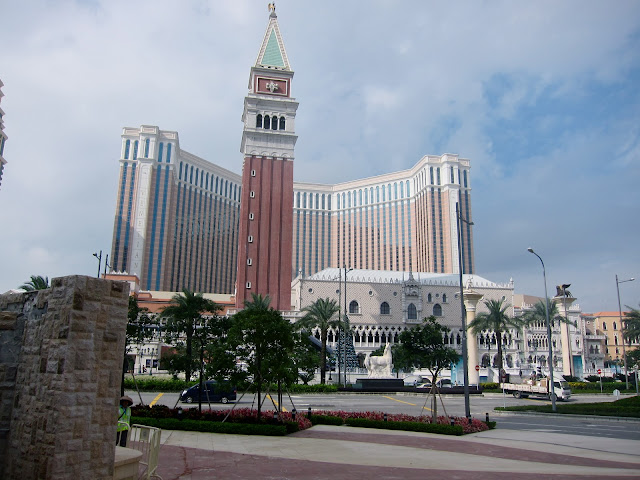 As we approach closer to the Cotai district , there beholds the great Venetian Casino and Hotel.
Everything looks like Las Vegas but on a smaller scale. Though there are so many upcoming projects, more hotels and casino's. In a few years Macau's gonna be Asia's very own sin city. 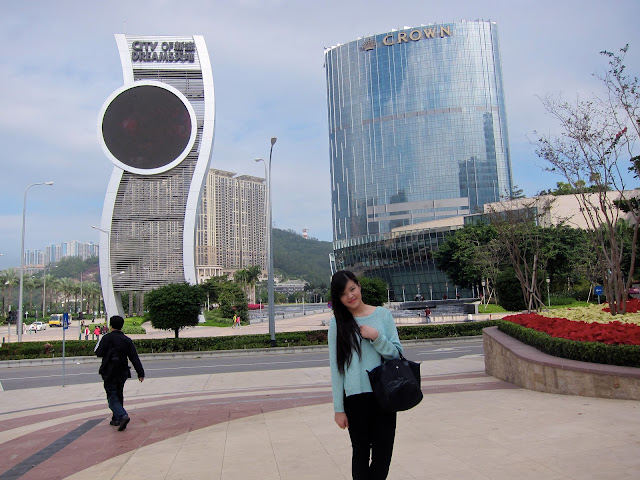 There's even Crown in Macau, if only I brought my membership card hahaha.

So we stayed at Holiday Inn, Sands, Cotai Central.
I don't know how it works but Sands seems to own or run Holiday Inn, Conrad and Sheraton.

The service was impeccable eventhough I had trouble communicating, the guy at the reception thought I laughed at him because I was happily giggling away with Erin about something else totally unrelated and I felt totally embarrassed and bad! ):

After checking in, we headed to the city central for some sightseeing and walking around. 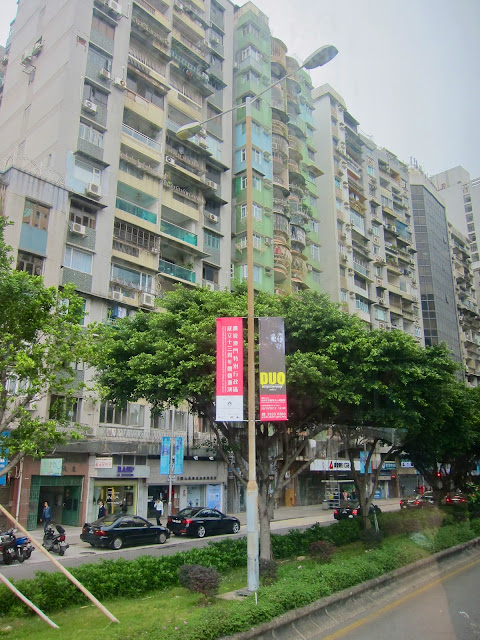 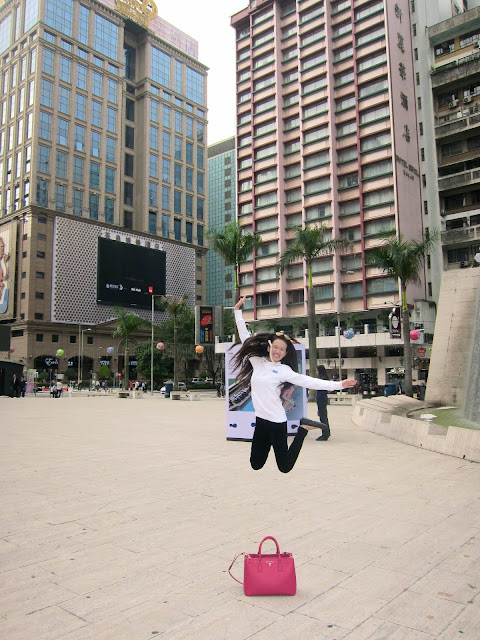 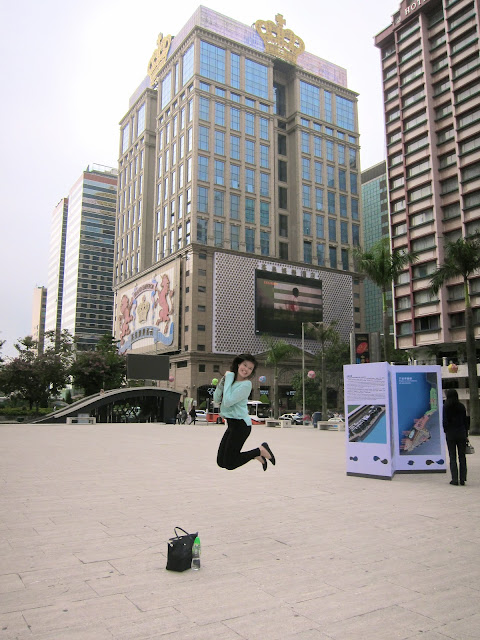 Jump shots in the middle of nowhere downtown lol.
Erin looks superbly cute and I wish I could do jumpshots like that without always smiling like my teeth is going to fall off lol. 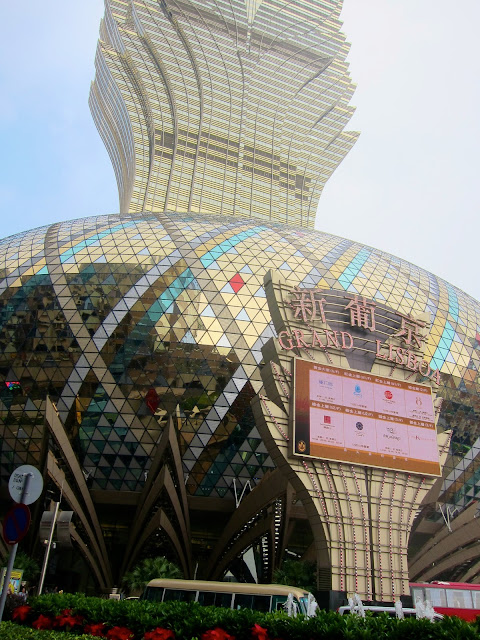 We then headed to St. Paul's Cathedral.
Along the streets to the cathedral we stopped for milk tea and portugese egg tarts. 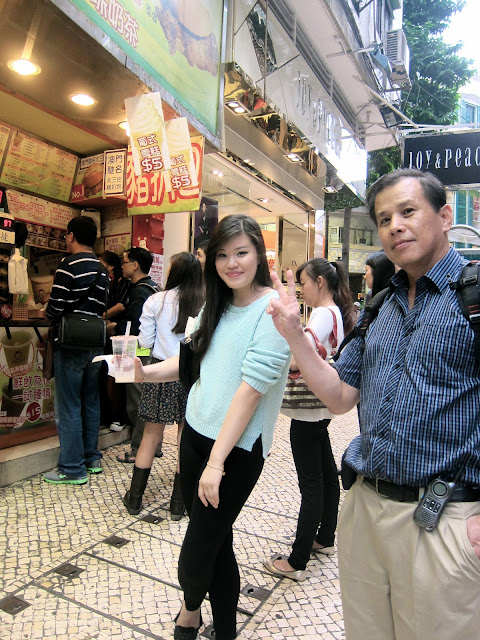 Okay, I dont eat egg tarts but according to the sis and dad, it was okay-okay.
Nothing much to rave about.
Milk tea also tasted like the ones back in KL. 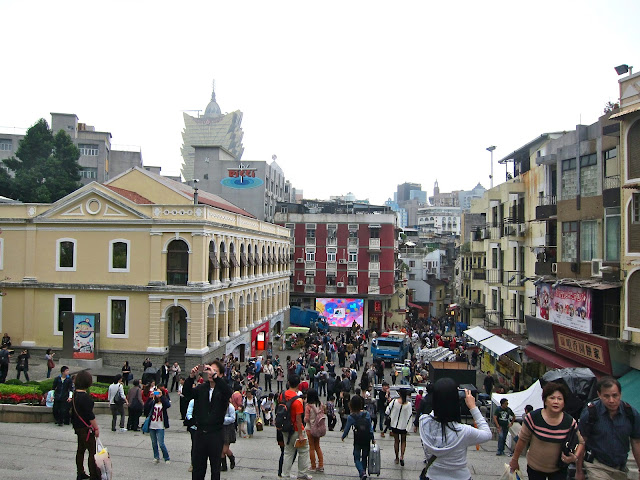 Finally we arrived!
It was a long walk, and look at the amount of tourists.
I can die. 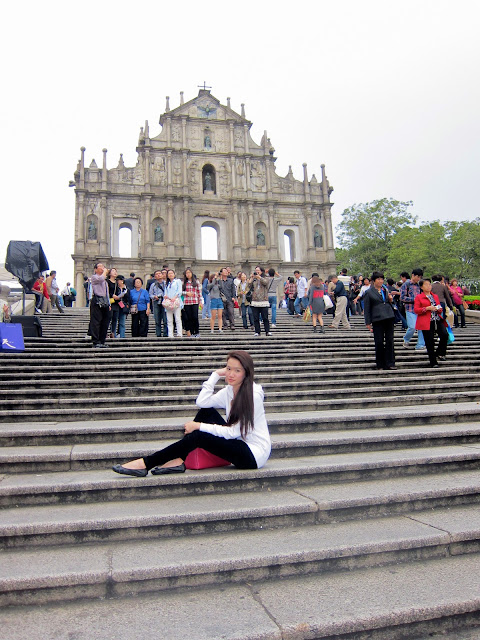 But the view made up for everything.
And it was fun being all touristy, exploring and stuff. 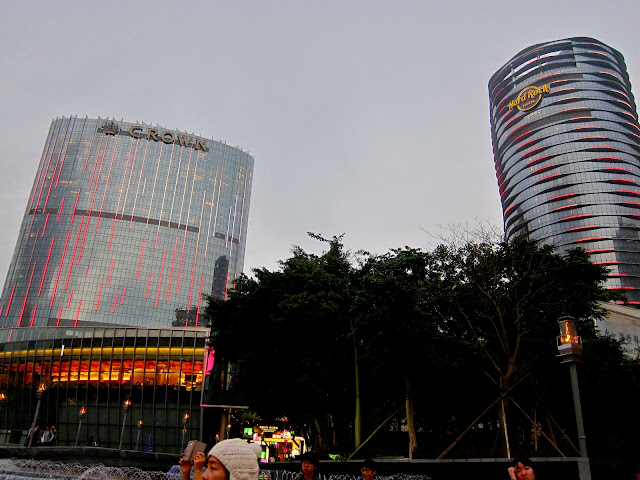 Crown on the left and Hard Rock on the right.

Finally we got back to the hotel late evening. 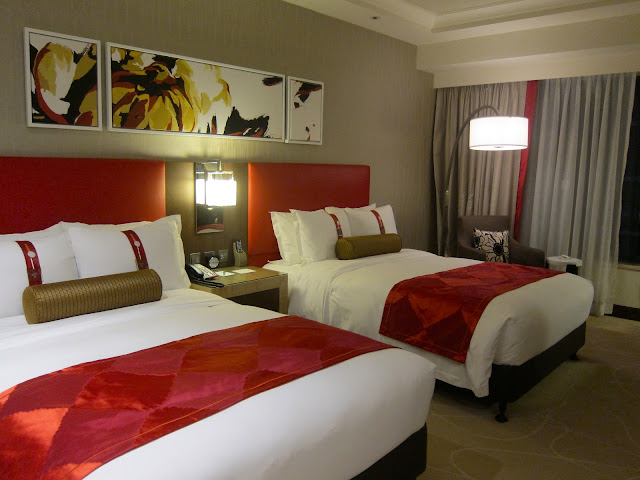 My expectations for Holiday Inn was deff not this!
Two super single beds that we're so soft to the touch. Four pillows, two soft and two firm ones AND a bolster! Haha. We had the view of the Venetian and a gorgeous pool below us. Sorry as I forgotten to take pictures with my camera, but if you followed me on Instagram you would've seen it.


Got changed and freshened up before heading out for the night.
We 'explored' The Venetian for abit.
We were actually looking for the Bellini Bar but ended up getting lost, I swear the place is hugeeeee. 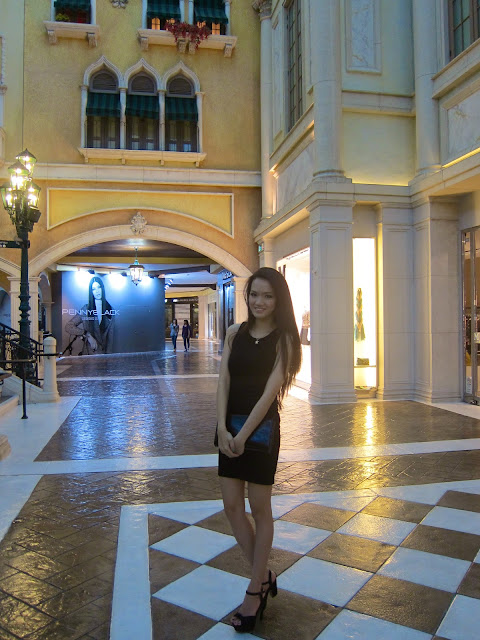 But it's definitely the best time to check out The Venetian's architecture and take pictures etc as the tourists are all resting or at the casino gambling away. 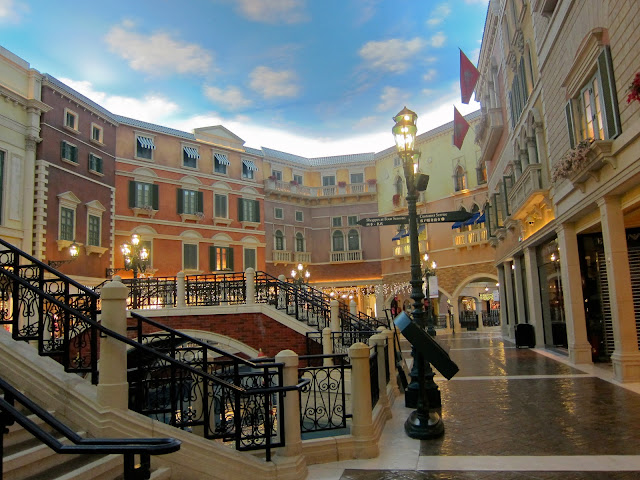 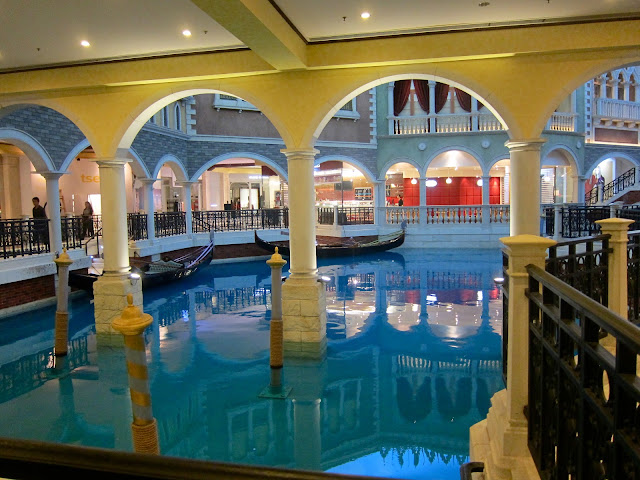 After getting lost and being all touristy, we looked at our watches and decided to head to Club Cubic as it was too late for the bar anyways.
Since, it was a Monday night there wasnt the usual HKD500 cover charge. We got in for free and the best seats in the house. 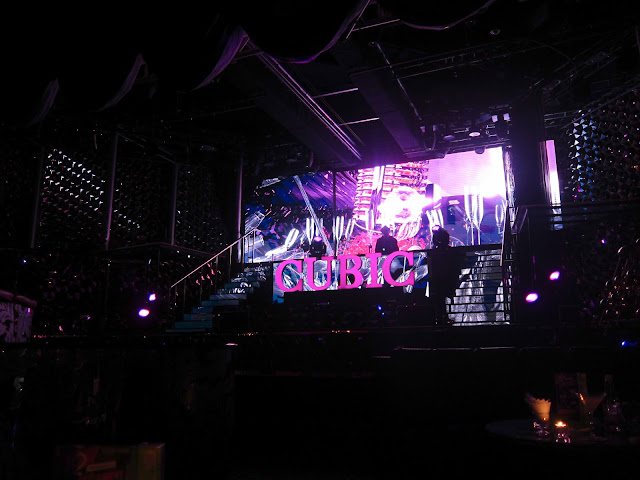 I was so taken by the stage, podium, lasers and LED lights.
The music was pumping and the atmosphere was great. High ceilings, booth seats, etc. ALL GOOD.
Not stuffy and small. It didn't reek of cigarette smell or damped carpets.

We enjoy the night by having a few bottle of beers, shots and what nots.
A supposedly chilling Monday night *facepalm* but it was all good and fun!

Alvin and I catching up since we hardly even get to talk much when we bump into each other in KL, and also talking about Uni stuff with the baby sister.
Yes, we chilled and talked in a club while also people observing, which was freaking funny heh. 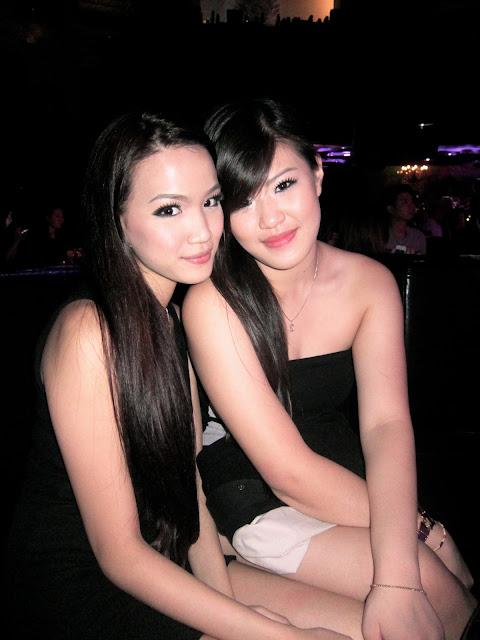 Well that sums up day one, the other days were more mellow too, did loads of relaxing, shopping, tea and clubbing haha. Stay tune for the next post!