As all beach holiday retreats, you go for island hopping!
Krabi is definitely nearer to Phi Phi island and most of the beautiful islands in Thailand compared to Phuket. Hence, if you're on a island hopping trip best choose Krabi as you won't have to sit on a long boat ride while island hopping. 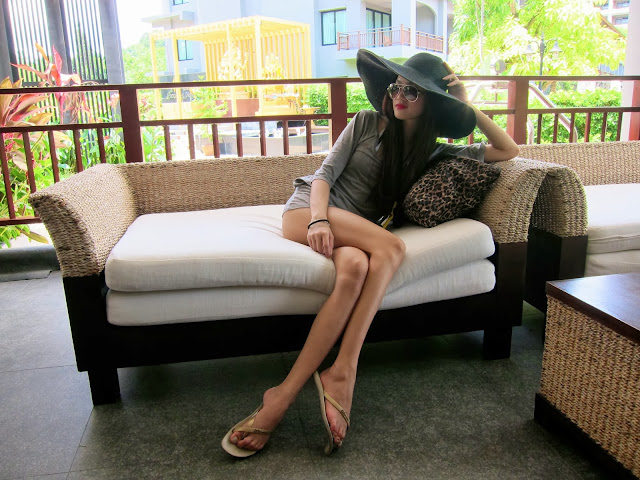 While waiting for the tour guide to pick us up from our hotel.
We chose the evening island hopping package cause firstly, we've never tried an evening one. Secondly, we were super lazy to be up all early and I wasn't feeling so well the day before. 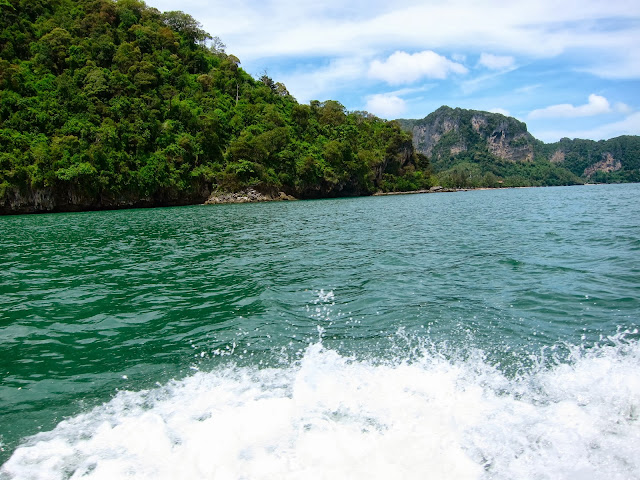 Off we go on our adventure!
I think people don't really choose evening sessions for island hopping as they think that they can get more from day time island hopping. Well I beg to differ. I kinda like the feeling that I don't have to rush and get up early. It was just very mellow and relaxing to go with the flow. 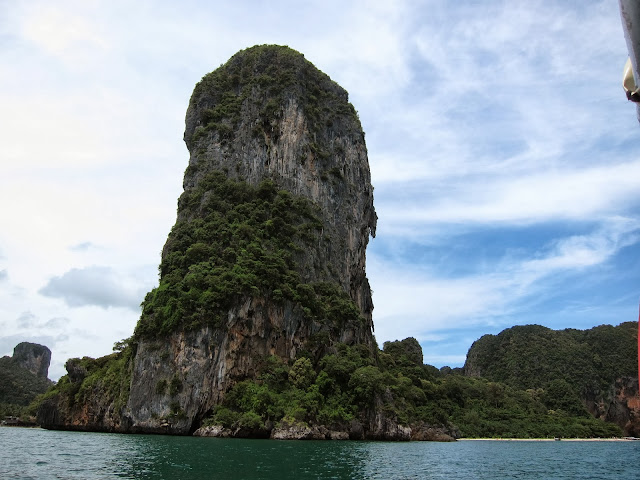 The sun was surprisingly kind that day and it wasn't that hot or humid either.

Finally we reached our first island!
I totally forgotten the name of the island but it was beautiful.
The water is not as clear and blue as the islands near Phi Phi but it was good enough for me. 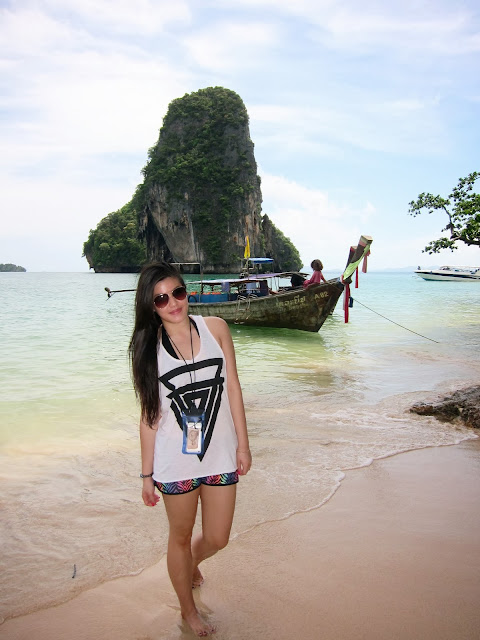 You will see this packet dangling from our necks every now and then ; it's actually our phones as daddy bought us these underwater pockets to place our phones in so it won't get damaged if it ever comes in contact with the water. You will see tons of them by Ao Nang beach selling for about 300baht. 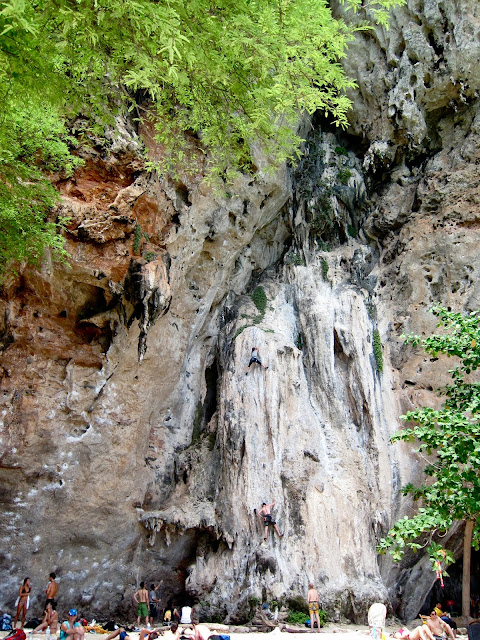 Back to the island, it's gorgeous! The limestones are probably the reason why the water is a shade of limey green. There are people rockclimbing as you can see from the picture above. 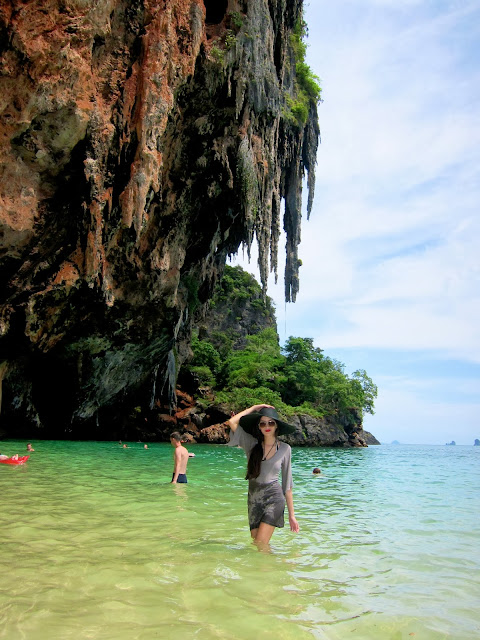 And some just basking under the glorious sun rays. 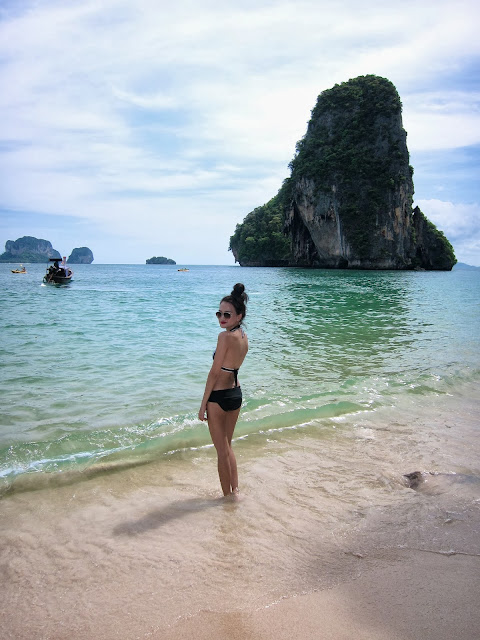 I was trying to get a tan but well we didn't have much time.

Moving on we took a tour around the surrounding islands.
This is called the Chicken Island as you can see it has this are that is shaped like a chickens head! 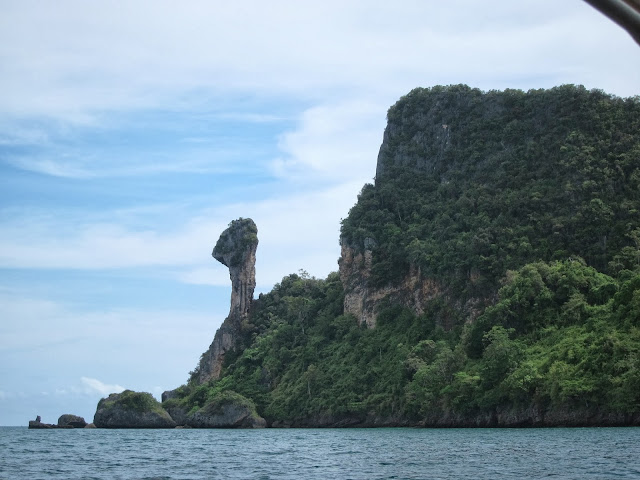 Oh and we stopped in the middle of the ocean for some snorkeling!
And look what our boatman caught ; 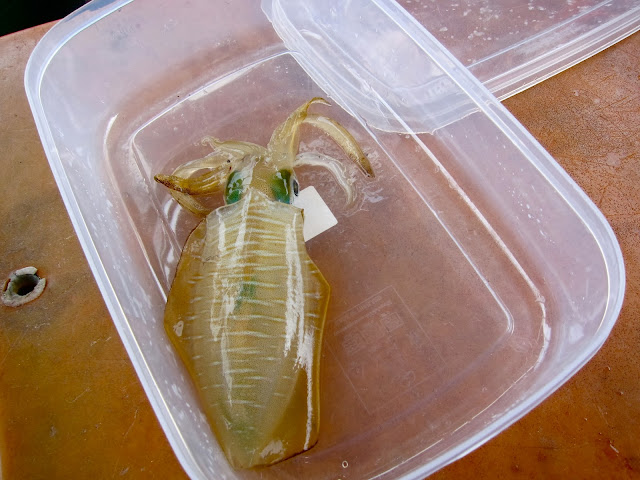 Some fresh squid to be barbecued for dinner later haha! I never knew they were transparent in colour when they're alive. Totally bimbo moment, super fascinated with it. 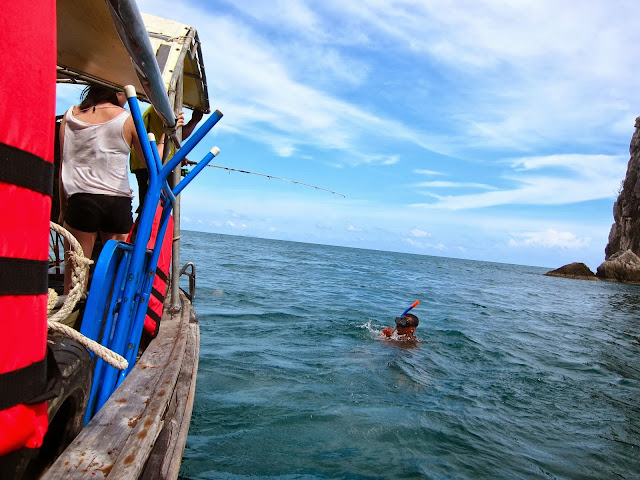 Then it was into the water for some swimming time with the fishes.
Didn't see anything spectacular except the usual same type of fishes. I did however snap some videos in the water, I'll try to upload them in my next post. 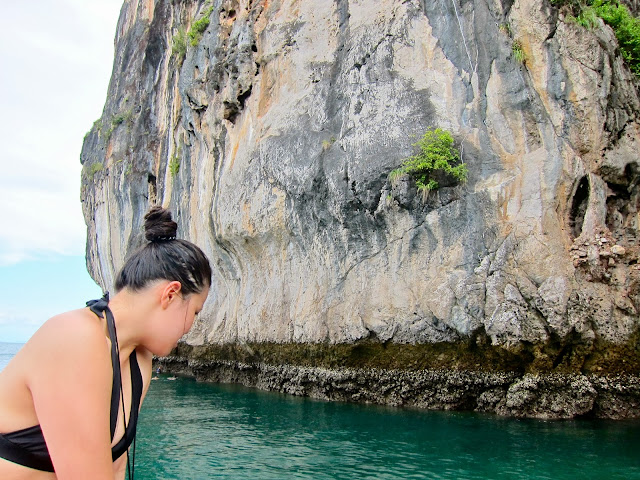 The water was much more bluer out in the middle of the ocean.
But the currents were equally strong too. We had a tough time swimming back to the boat. 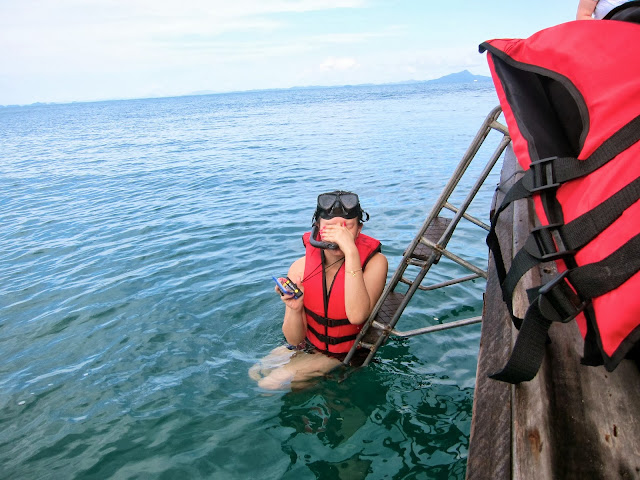 Our next stop was at this island with a sandbar inbetween.
I thought people were standing in the middle of the two islands cause it was low tide or something but no, there was a sandbar in between -.-" 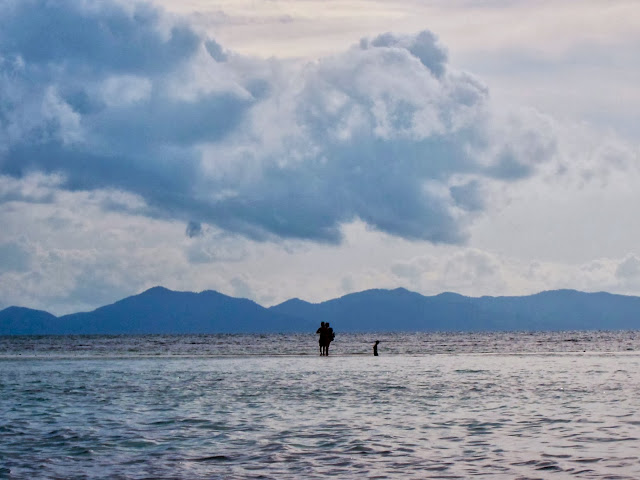 We had a couple of hours to explore on this island.
Too bad the sun was almost down I didn't get to tan but did a lot of exploring and walking. 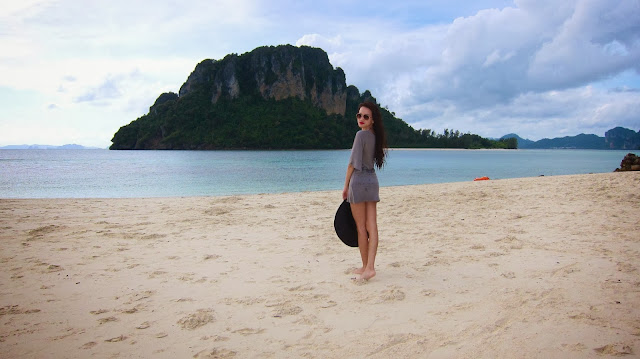 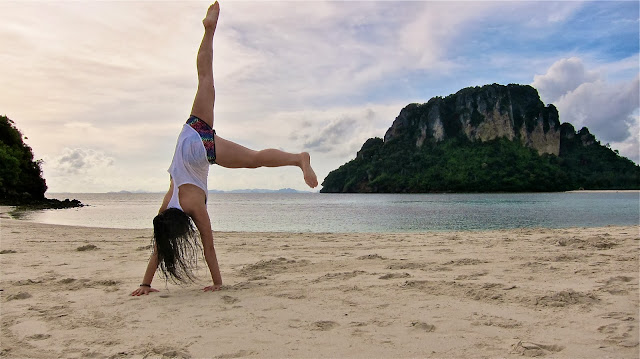 One great thing about evening island hopping is that you don't have to fight for spots or have people photobomb you as most of the places you visit will be quite quiet by then.
It's like you have the whole island to yourself. 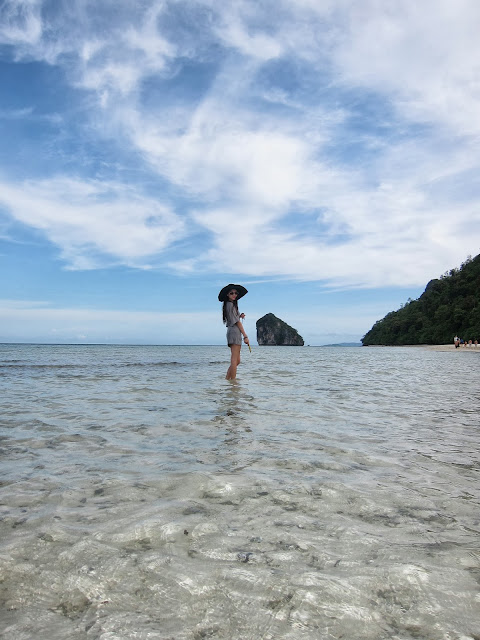 I was trying to catch a crab. Hoping to BBQ it for dinner but that little thing just ran too fast I couldn't keep up! 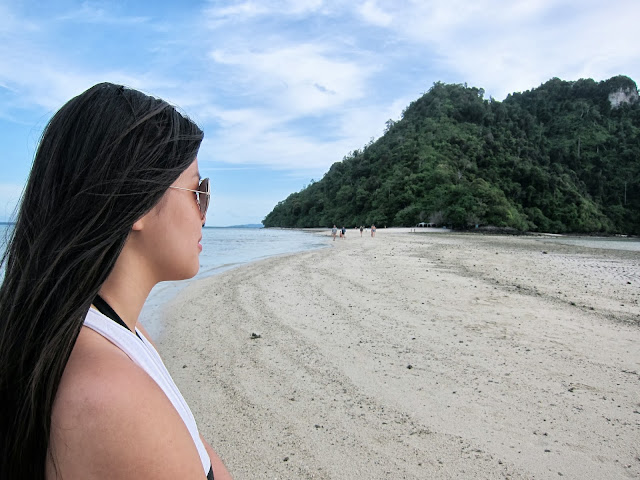 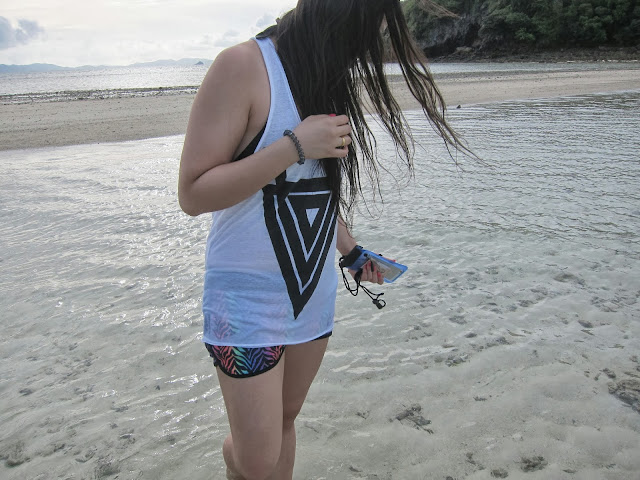 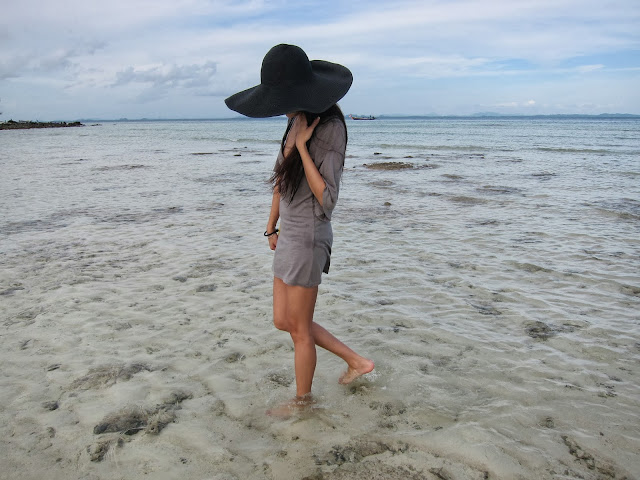 So anyways we got tired and just decided to fool around and stay in one spot while the rest of our group walks around.

Steps on how to do a bridge : 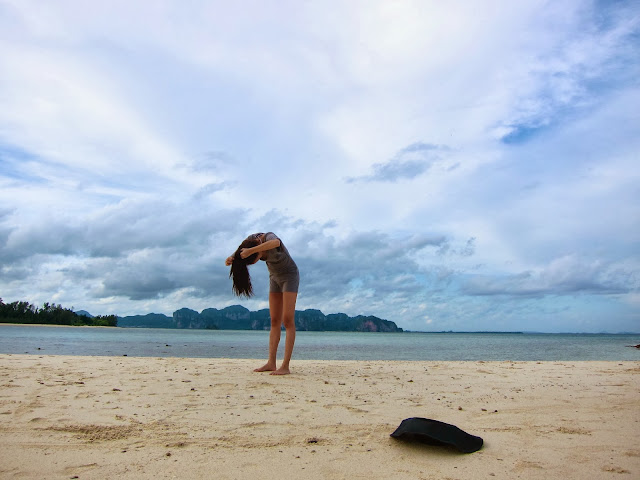 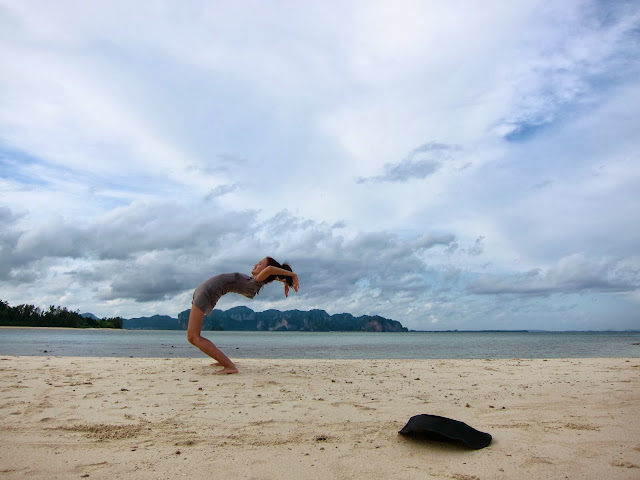 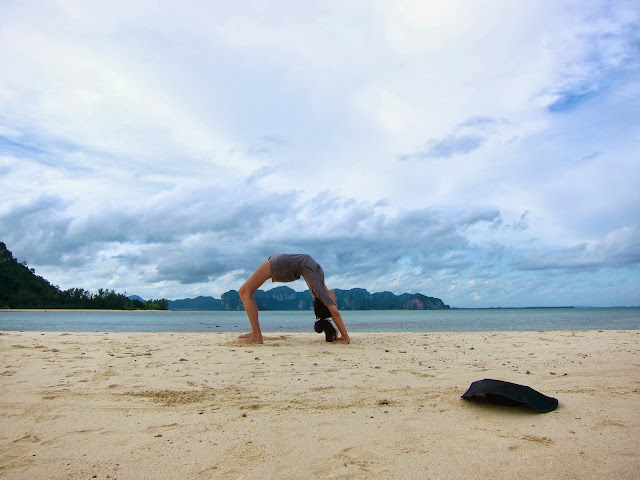 Always tie your hair when playing in sand ;)

I hate it when I get sand in my hair, takes me forever to get it off/out. 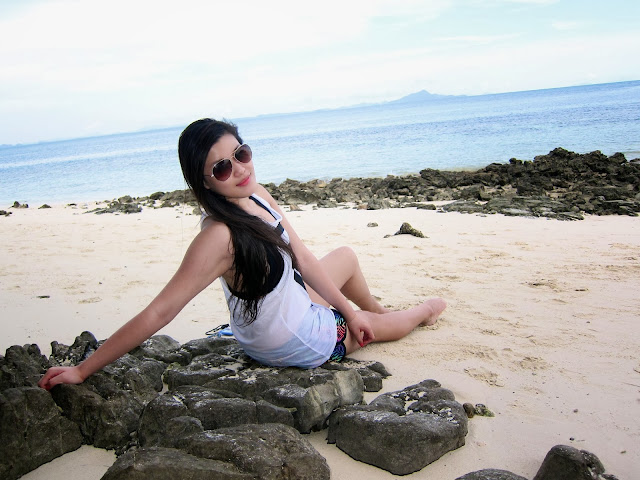 Well that's all for now.

I've been having major migraines this past few days and I can't stare at the screen for too long.