There had been rumors in the wind and shadows shifting in the dark. Tales of creatures of the night and music coming alive. Two legendary superheroes leading a horde of insane titans, set on a path to blow your minds to bits. Heed the words of caution as this is not for the faint-hearted. Rumors, they are certainly not.

The Wicked Festival 2013 is here! With a huge line-up it's certainly something that thou shall not miss! 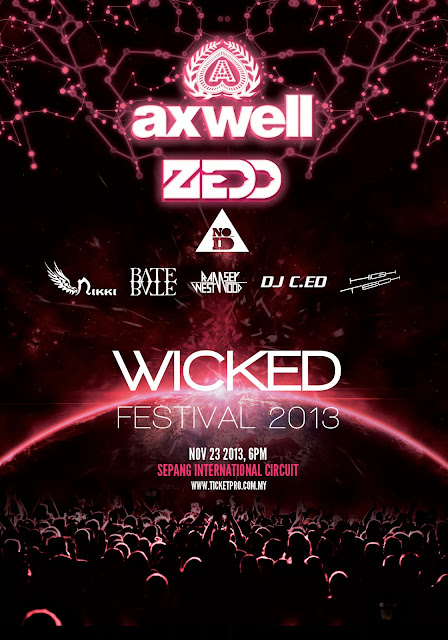 Axwell, the King from Swedish House Mafia pilots the crew. Who else but him can lead such a Wicked Festival? Who else is going to save the world tonight?
For the very first time in East Asia, Zedd will hit our stage and shed us some clarity. The magnitude of talents will melt your brains as No_ID from Amsterdam takes the stage along with DJ Nikki, BATE, Hightech, Ramsey Westwood and Captain Ed. The punches will come, blow after blow, one after another, all in a single night. Again, this is not for the faint-hearted. 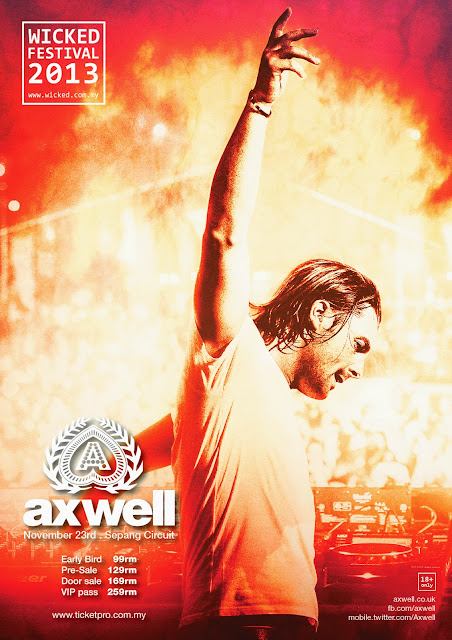 The Swedish House Mafia was first heard in 2007, in the Main Room at Cream Amnesia. Comprising of himself, Axwell, Sebastian Ingrosso and Steve Angello, the enigmatic trio decided to put their talents together to give birth to music that would stun the world and revolutionize the entire EDM industry. To say it was a moment of epic proportions will be an understatement. His name was soon whispered in all clubs and festivals. Very quickly after, it was chanted by hordes in the millions, echoing from all corners of the world.


He is none other than Axwell. And he is coming to Malaysia!

Axwell is definitely no stranger to the Grammy Awards too. He has also won numerous awards from the likes of Beatport, Billboard, MTV and etc. Headlining mega festivals like Tomorrowland, Ultra Music Festival, Electric Daisy Carnival, Stereosonic, Electric Zoo and etc is a part of who Axwell is. Today, Axwell is arguably the best EDM artiste in the world.

No one else is more fit to lead the first ever Wicked Festival in Asia! 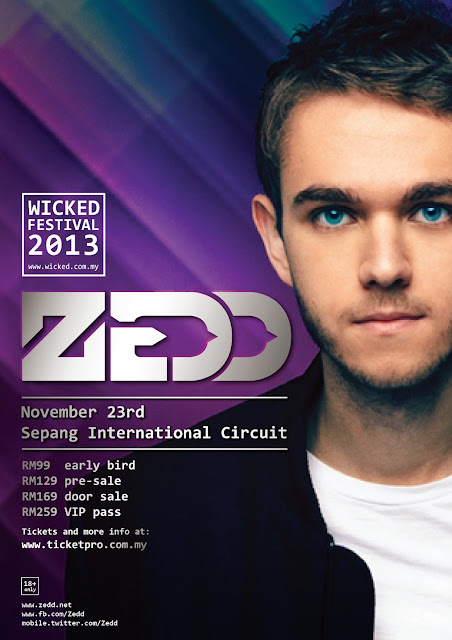 In 2009, Skrillex discovered a young prodigy whose music embodies the evolution in Electronic Dance Music and signed him into his label, OWSLA, Zedd was his name. Along the way the young prodigy has produced tracks for the likes of Lady Gaga, Black Eyed Peas, P. Diddy, Swedish House Mafia, Skrillex, Eva Simmons, and was also awarded Billboard #1 dance track of 2012. Today, his performance mesmerize millions in mega festivals like Tomorrowland, Stereosonic, Lollapalooza, Ultra and many more.


I myself wouldn't want to miss out on this as I've yet seen Axwell perform solo and what more Zedd. As some of you might know, I've attended Stereosonic myself but I didn't get to catch Zedd as I was a tad bit late and I heard it was an awesome set!

So, where else can something so wicked be, if not at the Sepang International Circuit!
Our very own pride and joy, world famous and well loved. When we say “ours”, we mean Malaysians of course.
The Belgians have Tomorrowland, the Americans have Electric Daisy Carnival/Ultra Music Festival and the Australians have Future Music Festival.
We, have Wicked Festival: 100% Original, 100% Malaysian.

So mark your calendars as the year draws to an end. November 23, Sepang International Circuit, or check out www.wicked.com.my for more info!

The tickets are now ready for purchase!


Stand a chance to win a single pass to this awesome rave featuring Axwell & Zedd by following these simple steps using Rafflecopter!


Winners will be announced on the 30th of October*!