I woke up with this gorgeous view of Melbourne.
Beautiful bright skies, lovely sunlight, skyscrapers reaching for the clouds and Crown, somewhere with so much memories.

After two weeks of being here, it finally got to me. Things I've been doing wrong. I took certain things too lightly, which I should've acted upon and not brush it off. I was holding back reality for the longest time ever without realizing it. I actually thought I was dealing with reality but I wasn't. I had it easy without knowing, and I almost took everything I had for granted.

We all have to grow up eventually. We'd be lucky if we knew when or how to.
I guess I'm slowly getting there. The responsibilities that slowly piles on feels like a drag at times, but when you look at the whole picture, life makes more sense when you let it take its course. 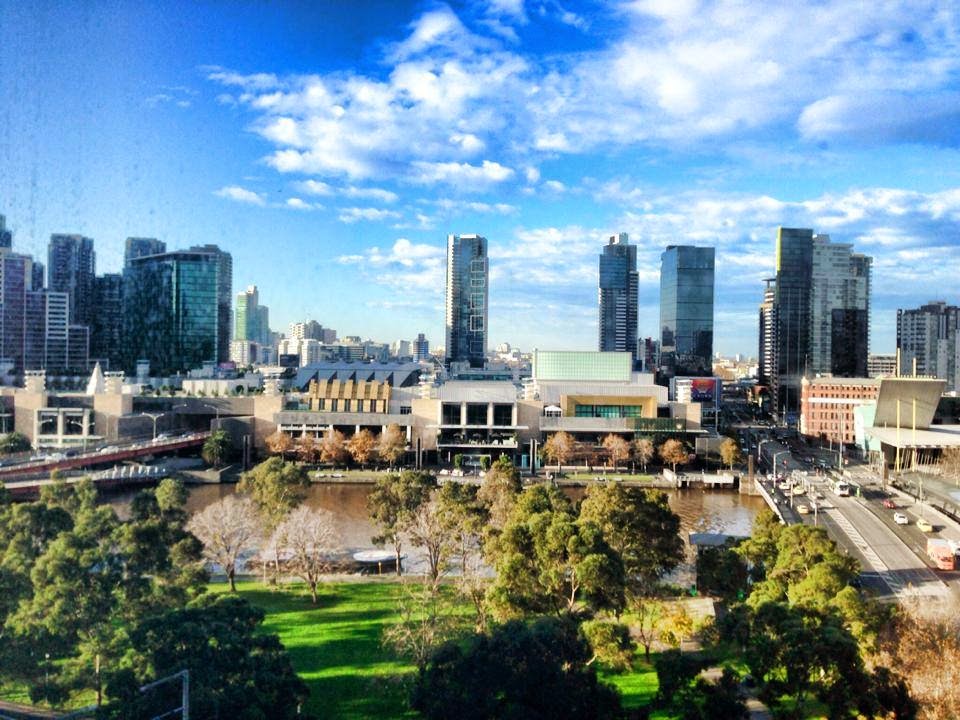 One day, all that bickering, misunderstandings, gossip, trash talk, rumours, won't be a worry no more. It will always be there, it will always happen, but after a period of time, you'd just realize these don't matter to you no more and it doesn't affect the way you function. It took me years to get that or feel or even think that way (trust me, repeating it to yourself doesn't work), it has to get to you willingly. I finally got over that with much help from a good circle of friends, close family; it really does make a difference of who you mix with.

"We’ve all been the so-called ‘victim’ to several things in life. Whether it be an unexpected break-up, getting fired from a job, or even something as serious as the recipient of domestic abuse. Truly happy people tend to be those who choose not to dwell in it. They choose to let the victimization strengthen them, rather than wear it as a badge of weakness or as the thing that makes them consistently worthy of receiving sympathy.
As fun as reminiscing about the past or fantasizing about the future can be, nothing will ever be done in anything but the present. Use it as motivation to make the most of it. In addition to being motivating, presence can also come in handy for truly appreciating those moments of relaxation, allowing yourself to be truly in them, rather than projecting future concerns into them.
Trust the process and existence of everything in their life. They know that nothing is ever too big to handle and choose to embrace what life is currently throwing at them rather than cowering at the sight of it." -- by Mark from www.collective-evolution.com

Coming here again, for the fourth time now, changed something. I really have to deal with things I've been ignoring for so long.
I managed to close a chapter that was left opened for a while and that felt so good. To know for sure. Even though I know now, the things I have to deal with might end up in the worst way, I have to face it instead of running away from it especially since it was made from assumptions and word of mouth. I am scared, for reasons not even related to the problem, all these over thinking. Even if I am standing alone, I will deal with my inner demons or it'll just grow and spread like cancer. I can't avoid it forever.

A friend once said, "What you say and do doesn't matter. What the other person feels and understands is all that matters." it makes so much sense now. It applies to every thing, on social media, real life, whatever. Your actions leads you to where you are. You might have good interest or no intentions while doing something but people might perceive something else. Everything comes around. It's what you put up or out about yourself that gets judge, you might not see it in a bad light, but others might. Things goes both ways and sometimes we tend to forget about the receiving end.

Now I know why I keep coming back here. And this place always crosses my life. In very odd ways. I always have a reason to come back. Well, it's time to let changes take its course, it might not be good, it might not be bad. We'll see in time.