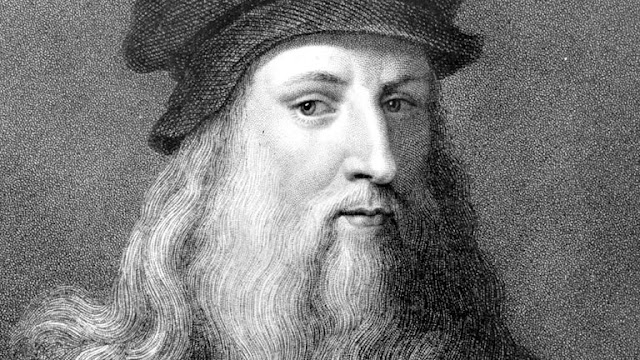 Leonardo da Vinci was undoubtedly one of the most famous personalities of the Renaissance who’s known for his enduring art pieces “Mona Lisa” and “The Last Supper”. Leonardo da Vinci was born on 15 April 1452 in Vinci, Italy, and was very fascinated with the laws of science and nature, which greatly influenced his work as a painter, sculptor, inventor and draftsman.

At the age of 14, da Vinci began apprenticing with the artist Verrocchio, and until age 20, he learned a variety of technical skills, including metalworking, leather arts, carpentry, drawing and sculpting. Soon after, he qualified as a master artist in the Guild of Saint Luke and established his own workshop.

Da Vinci’s most well-known painting, and probably the most recognisable painting in the world, the “Mona Lisa,” was a privately commissioned work and was completed sometime between 1505 and 1507. There have been many rumours that Mona Lisa had jaundice, that she was a pregnant woman, and that she wasn’t actually a woman at all, but a man in drag.

In 1482, a prominent Italian named Lorenzo de’ Medici, commissioned Leonardo da Vinci to create a silver lyre and bring it to Ludovico il Moro, the Duke of Milan, as a gesture of peace. Leonardo da Vinci did so and then in what was a very smart marketing move, wrote Ludovico a letter describing how his engineering and artistic talents would be of great service to Ludovico’s court. Ludovico was sold and from 1482 until 1499, Leonardo was commissioned to work on a great many projects which included “The Last Supper”.

Da Vinci has been called a genius and the archetypal Renaissance man, however his talents extended far beyond his artistic works. He did not see a divide between science and art, and his numerous observations and inventions were recorded in some 13,000 pages of notes and drawings, including designs for flying machines (some 400 years before the Wright brothers’ first success), plant studies, war machinery, anatomy and architecture. His ideas were mainly theoretical explanations, and were rarely experimental. However his drawings of a fetus in utero, the heart and vascular system, sex organs, and other bone and muscular structures, are some of the first on human record.

One of da Vinci’s last commissioned works was a mechanical lion that could walk and open its chest to reveal a bouquet of lilies. Leonardo da Vinci died in Amboise, France, on May 2, 1519, however his ideas and body of work live on and have influenced countless artists till today.

So why did I bring up Leonardo da Vinci? Well it’s because his work has an impact on art and fashion today as demonstrated in the Montblanc Meisterstück Sfumato collection. 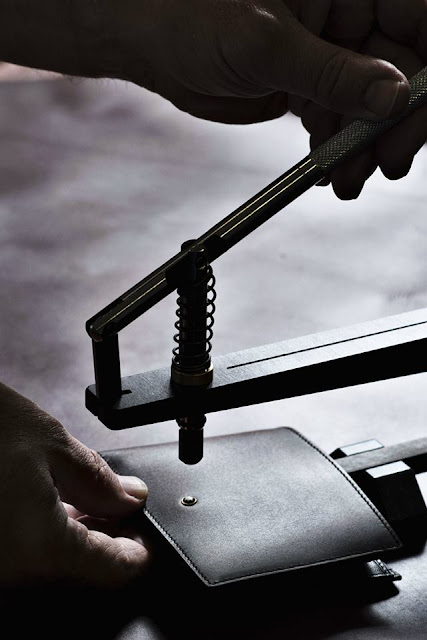 For more than 100 years, Montblanc has been a German manufacturer of writing instruments, watches, jewellery and leather goods with traditions of creating products of lasting value and exquisite craftsmanship. These days where a lot of products are made to have a limited lifespan to encourage consumerism, it’s refreshing to know that Montblanc’s uncompromising principles of design, style, quality and workmanship have resulted in heirloom collections that are passed from generation to generation.

The heart of a Montblanc product is undoubtedly the iconic Montblanc emblem which is a symbol of excellence. The recognizable emblem is featured on their luxury writing instruments, timepieces, leather, accessories, fragrances and sunglasses. Owning a Montblanc writing instrument is often considered a testament that you have achieved success in life. 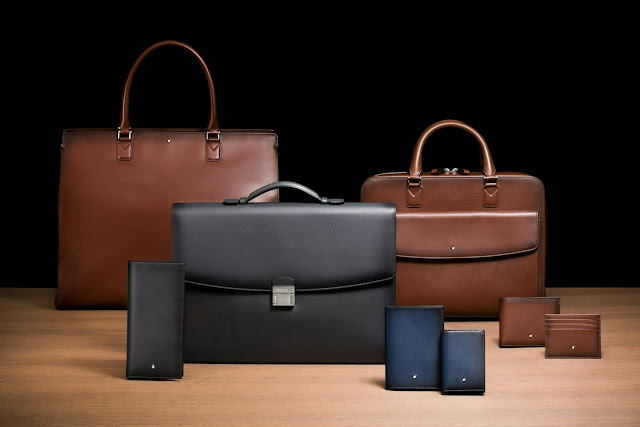 Montblanc revisited a painting technique developed during the Renaissance by the great masters, and applied it to the treatment of leather, delving into the history of fine craftsmanship to discover new unexpected ways to extend the beauty of its leather designs.

The result is the new Montblanc Meisterstück Sfumato collection: a collection of masterfully painted leather goods with a contemporary and sophisticated appeal. 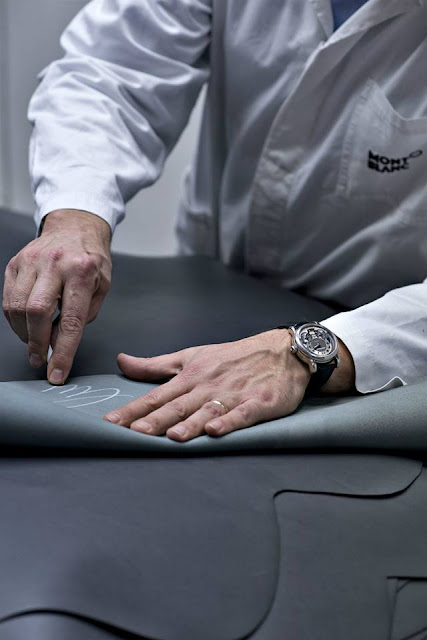 The Montblanc Meisterstück Sfumato collection blends age-old traditions with Montblanc’s passion for the finest craftsmanship, inspired by “sfumato”, an ingenious painting technique pioneered by Leonardo Da Vinci and his followers. “Sfumato” means “evaporated like smoke”, and is the fine shading and delicate graduation between colours to produce imperceptible transitions between colours and tones.

This technique is evident in Da Vinci’s Mona Lisa, his most famous portrait, where an atmosphere of great softness is achieved by masterfully blending areas into one another through the superimposition of many layers of thin paint with tiny brushstrokes to eliminate lines. 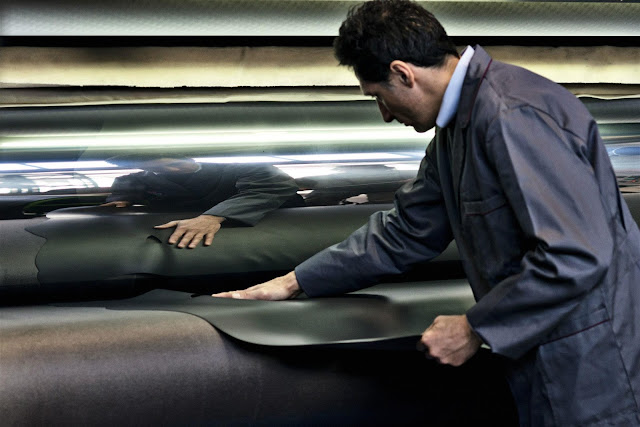 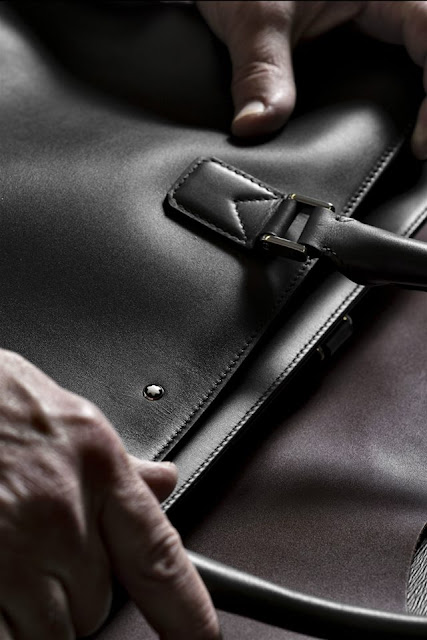 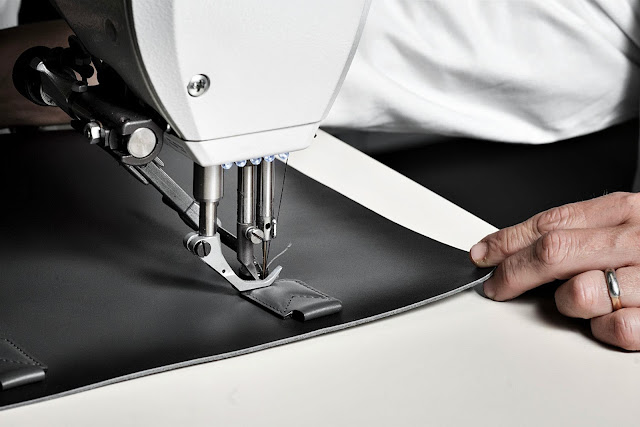 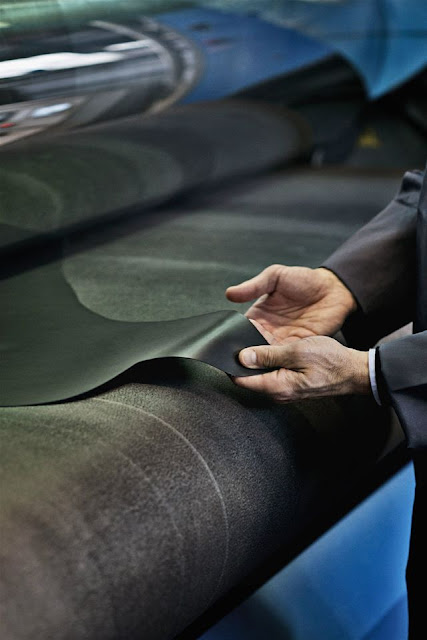 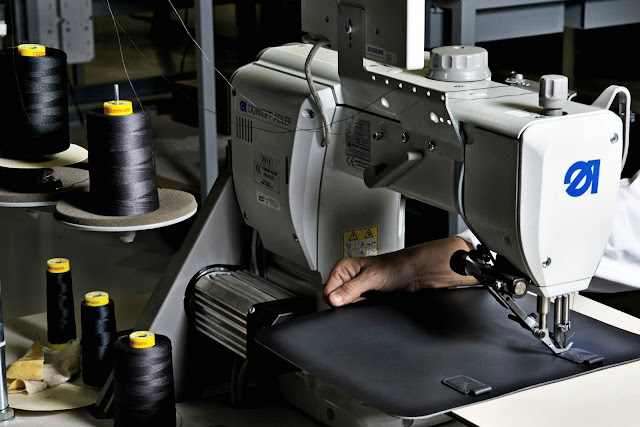 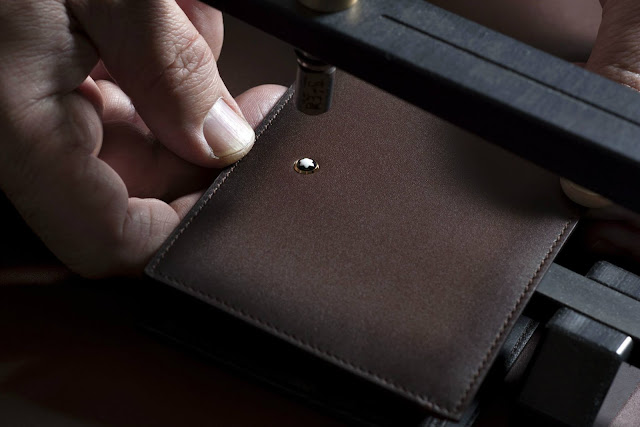 Montblanc’s master craftsmen have applied this sfumato effect to the finest and softest calfskin giving it an elegant patina at the Pelletteria in Via delle Nazioni Unite, Scandicci – a small town of 50,000 inhabitants in the province of Florence, Italy.

The process which is painstakingly intricate, sees four (4) layers of paint lightly applied to each individual piece of leather creating a special finish. The sfumato technique when expertly applied mirrors the luxurious qualities of the leather itself, delivering a shadowed appearance that enhances the softness of the leather. Because each piece is delicately painted by hand before it is assembled, every bag, wallet or belt from the collection is completely unique.

No matter whether a document-case or full briefcase, large tote or wallet, coin case or card holder, each of the pieces in the Meisterstück Sfumato collection has the distinctive qualities of a work of art, making it a one-of-a-kind piece.  However, unlike a piece of art, these pieces are meant to be used therefore the functionality aspect is given due thought with the addition of contemporary details. 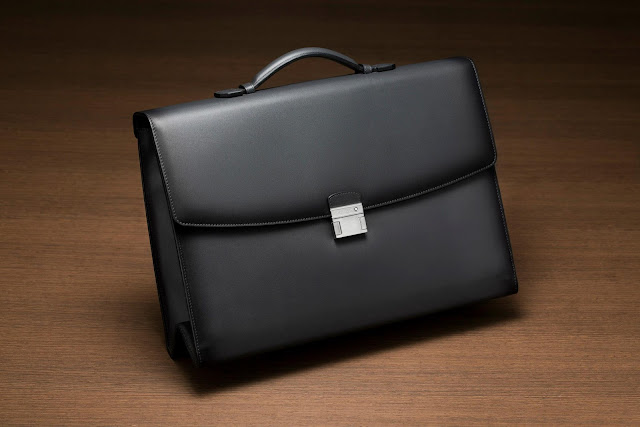 The Classic Single Gusset Briefcase features a brand new signature lock, sliding top handle and a unique construction at its base that makes it easier to flatten the bag completely when empty, or the Contemporary Slim Document Case with its two compartments, one for documents and one for a laptop or tablet to accommodate the latest technology. Larger pieces from the collection are lined with grey suede for an added touch of sophistication. 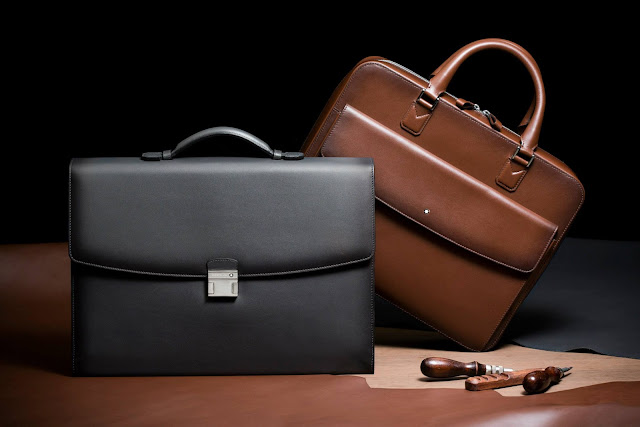 Quality control is taken serious at Montblanc to ensure that every product delivered is of the highest quality and will endure the test of time. To that end, extensive tests are carried out before a product can leave the Maison’s Pelletteria. The products will have to endure stress tests that ensure the mechanical resistance of the products from the handles to the stitching or the closures, while the colour fastness tests affirm that the leather will not be affected by fading or colour migration over time. 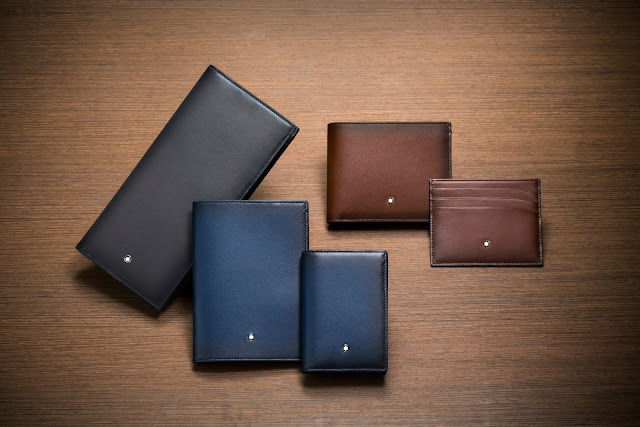 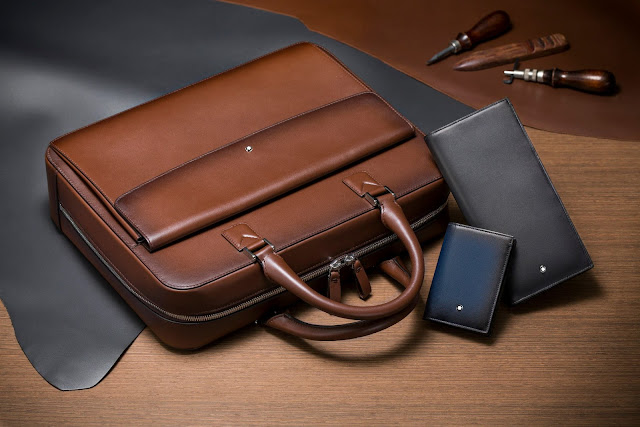 The collection is available in three colours: rich brown, anthracite and navy blue, where the technique allows the shadow effect of the sfumato to be displayed at its best. Each piece is designed as a lifelong companion, made of the highest quality leather, and embellished with a newly designed M-shaped leather clasp – indeed a work of art!

Montblanc demonstrates through the Sfumato Collection that surprising innovations can come from the discoveries of the past, revisited through the hands of skilled craftsmen to create an exclusive collection of timeless leather pieces, each one a fully functional painted masterpiece, that you can carry with pride and confidence through life’s adventures. 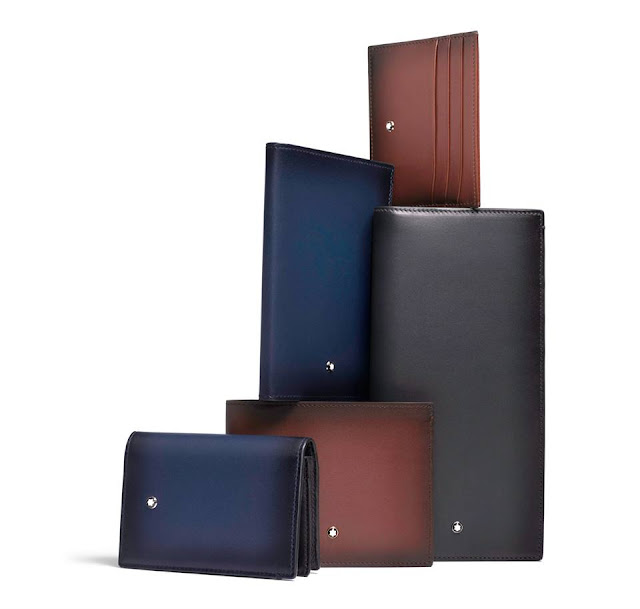 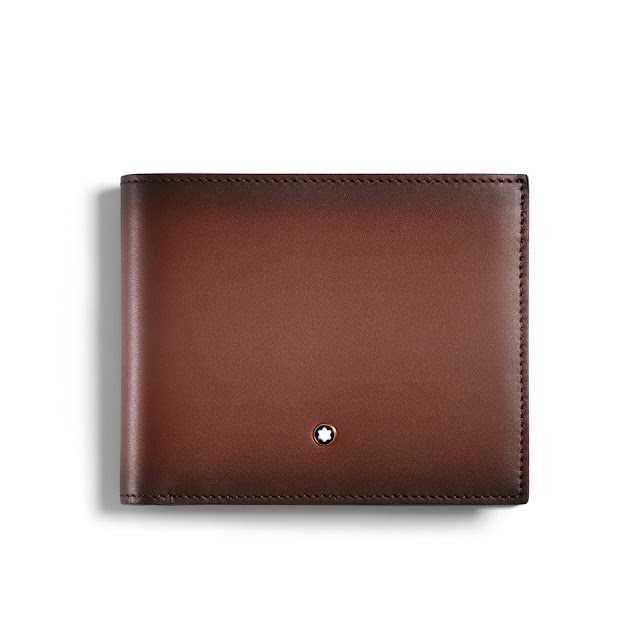 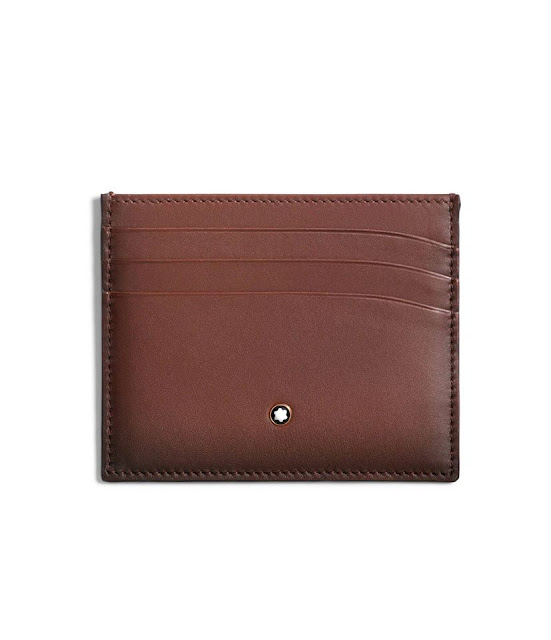 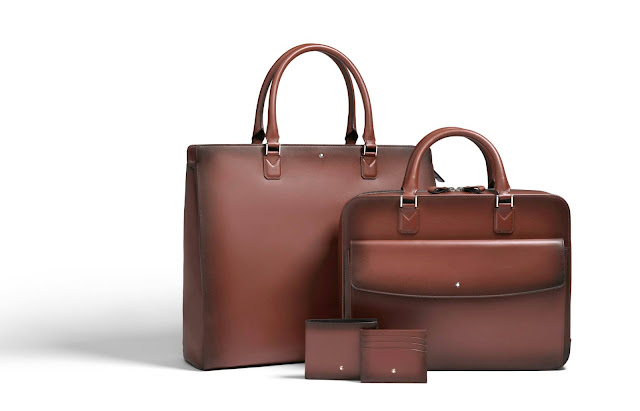 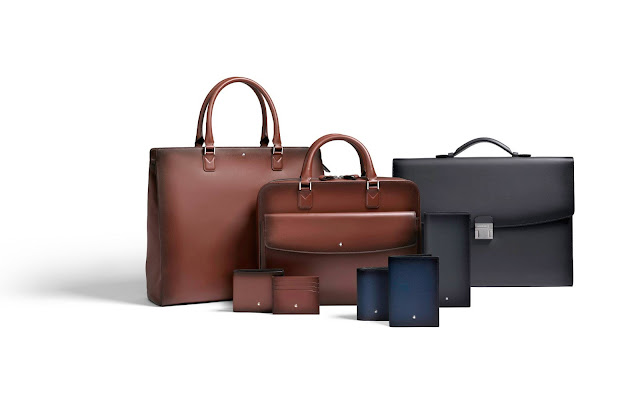 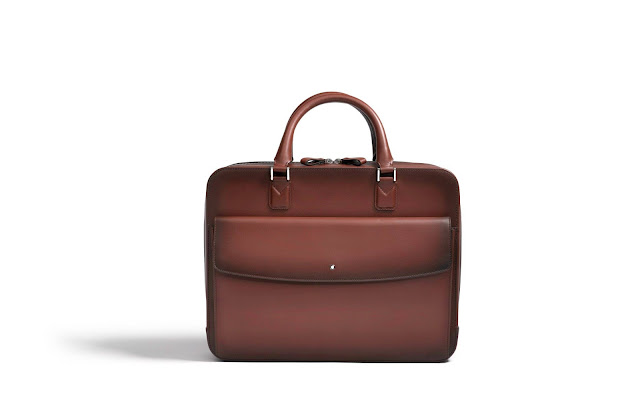 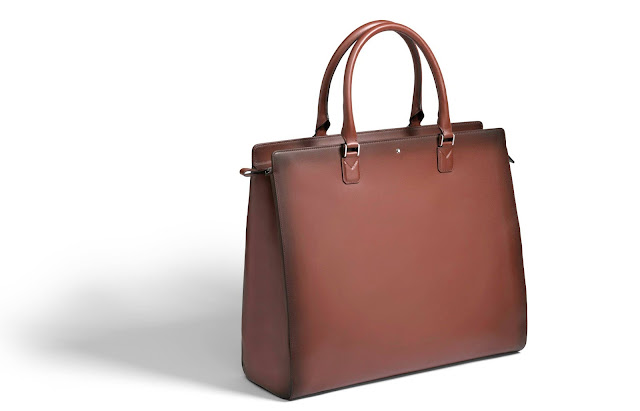 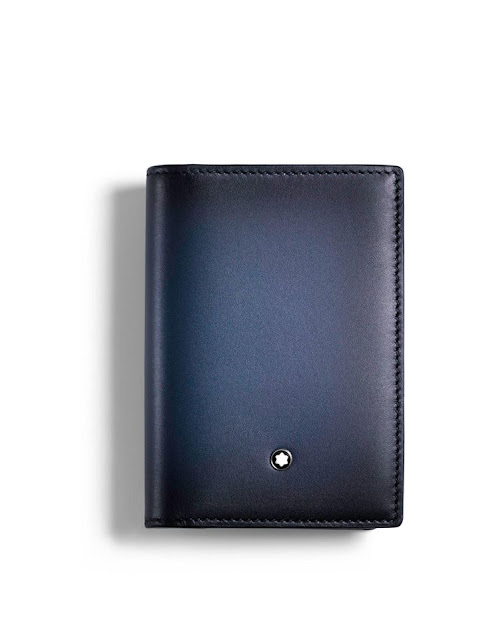 The Montblanc Meisterstück Sfumato Collection is currently being previewed in the Montblanc boutique worldwide in Pavilion Kuala Lumpur until 23 August 2015.

Here’s your chance to walk away with some awesome Montblanc leathergoods!

Simply visit the Montblanc boutique at Level 2, Pavilion KL to take a picture of the Montblanc Meisterstück Selection Sfumato collection and share it on your Instagram or Facebook. The top 5 images with the hashtag #montblancsfumatomy with the highest number of “Likes” by 23 August 2015 will be the winner.