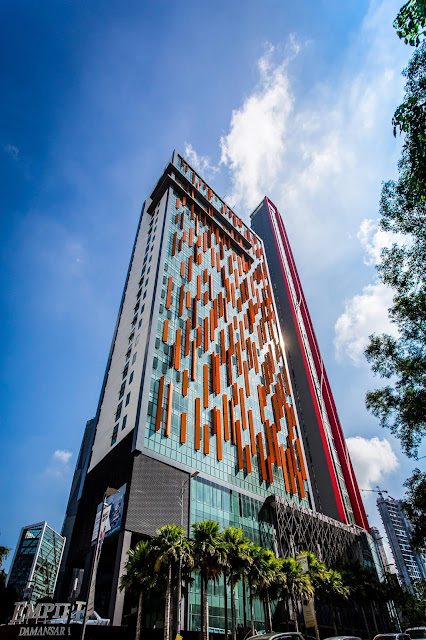 MHB’s Tim Chew and I were recently invited over to the Qliq (pronounced as “click”) Damansara Hotel in Damansara Perdana. The hotel is situated within the new so-called “Golden Triangle of Petaling Jaya” which encompasses Bandar Utama, Mutiara Damansara, Damansara Perdana and the new Empire City across the highway. When Empire City is finally completed, Qliq Damansara Hotel will be 5 minutes driving distance from is some of the trendiest lifestyle and shopping areas, arts and culture spots, and business districts.

The hotel features a modern and refreshing design with bold colours, flaunting slightly cheeky, quirky, non-conformist yet simplistic designs throughout the hotel that are meant to be appealing to the “next generation” of travellers.

The lobby which has a modern design

Checked in to my room

My room was on the ladies only floor and came equipped with more ladies facilities such as a yoga mat and ball, and extra ladies toiletries and even a loofah

I was quite surprised by the size of the room

Bottled water, kettle and mugs and teabags to make drinks

The shower stall had a rain shower head which was great for a nice relaxing shower!

Food wise, the hotel has an all-day-dining restaurant which is Hugo’s by Modestos and also a Starbucks. There’s lots more food in Empire Damansara which is connected to the hotel.

The deck chairs beside the pool

Qliq is equipped with 11 meeting rooms of different sizes. Pictured here is the round table boardroom.

The next morning, we caught with Tony Lim, General Manager of Qliq Damansara, who shared with us more info on the hotel.

Qliq Damansara features 271 guest rooms, including 31 clubrooms and 8 suites, suitable for business travellers, and outstation guests visiting IKEA, The Curve and Kidzania. The rooms have contemporary and modern styling, and are well equipped with amenities such as free and fast Wi-Fi, a whole lot of wall sockets for UK, EU plug types, a minimum of eight (8) USB powerpoints for charging digital devices. The beds are large and comfortable beds, and you get a view of the lush greenery behind Damansara Perdana or the bustling township and the surrounding areas.
Qliq Damansara has more than 6,400 square feet of meeting space and event facilities, which can accommodate small to medium size events, from small board meetings up to functions for 150 people. All the 11 meeting rooms have quirky names, and offer the latest audio-visual equipment and individually adjustable air-conditioning. The foyer outside the meeting rooms encourage guests to mingle, and there’s the Qliq Corner with high-speed internet where guests can charge their handheld devices and share ideas at the communal table.
The hotel is staffed by talents or “Qliq-ers” who have various skills. For example, the staff at the reception are skilled at folding origami which you will find in the rooms. Also don’t be surprised if the concierge or floor staff burst into song as some are known to be talented singers. All this contribute to a welcome and friendly atmosphere in the hotel.
The music in the hotel changes during different times of the day to suit the mood, and complements the different sections of the hotel. There’s also a 24-hour Anytime Fitness Centre featuring state-of-the-art cardio and strength training facilities for fitness buffs. In the car park, there is a ladies parking zone which is closest to the hotel entrance for the safety of the female travellers.

Qliq Damansara is located at:

For more info or to make a booking, head over to http://www.qliqhotels.com/