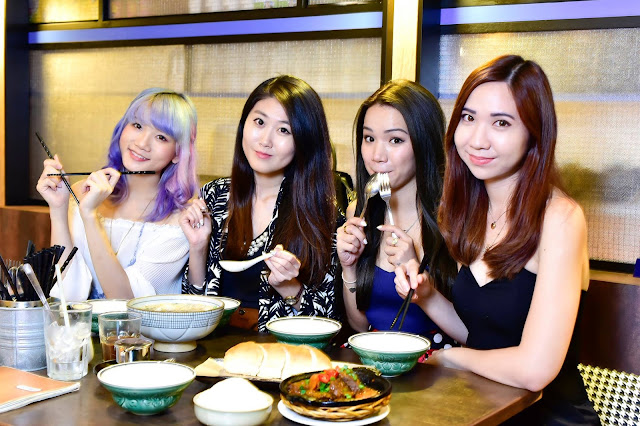 [Upcoming Event]
The new Atria Shopping Gallery is OSK Property’s first flagship mall, a total transformation of the old mall to cater to today’s trends and tastes. The new Atria’s interior is inspired by the natural beauty and exquisite forms found in the Malaysian tropical rainforest, which provides an ambience that is warm and welcoming and most importantly – modern! With its new tenant mix, the shopping offers shoppers total shopping and dining experience and has everything from health and fitness, kids and entertainment, fashion, beauty, IT, home and living, and a Village Grocer.
I Love Yoo!
Hometown Chinese Restaurant
Pho Vietz
Go Thai
Eggu
This month, Atria Shopping Gallery will be having a comedy and food fest where you can expect one and a half hours of rib-tickling jokes as some of the top Malaysian stand-up comedians keep you entertained and help you forget your blues at special sessions on Thursday, Friday and Saturday on the Ground Floor.
The food festival will be happening on the Concourse Floor from 20 to 31 July 2016 featuring some of the mall’s tenants as well as outside vendors. In conjunction with the fest, Malaysia’s most famous culinary personality Datuk Chef Wan will share his delicious recipes and demonstrate his cooking skills.
We decided to visit some of the food and beverage outlets who will be participating in the upcoming fest so it was up to the third floor of the shopping centre which houses a whole variety of restaurants, cafes and F&B outlets.

I Love Yoo! is known for their traditional Chinese favorites including ‘You Tiao’ and ‘Tau Foo Fah’ and they only use 100% fresh and new palm oil for frying, non-genetically modified soy bean and high quality ingredients. We had our breakfast there which consisted of red bean and peanut sesame balls, soya bean, you tiao and Hainanese coffee.
Not a bad way to start the weekend…

Then it was over to Hometown Chinese Restaurant to try their Traditional Pork Noodle Soup (RM15.90++) and Mince Pork Noodles with Chicken Drumstick (RM15.00++). Both the dishes were the bestsellers at the restaurant and a favourite among patrons especially during lunchtime. The portions were pretty big and the pricing quite reasonable for a restaurant in a shopping mall.
We washed down the noodles with a pot of hot Jasmine tea in a restaurant setting reminiscent of the olden days Chinese restaurants with marble tables and rose wood furniture.

Pho aka Beef Noodle Soup
Pho Vietz is famous for its Pho aka beef noodle soup (RM17.90++) which consisted of vermicelli soaked in a really flavourful broth made from beef bones, oxtails, flank steak, charred onions, ginger, and spices. This restaurant gets quite busy during lunch and dinner so make sure you go early if you intend to dine there.

Of course we had to try their famous Vietnamese coffee with milk which imparted a really fragrant aroma and a rich taste.

Go Thai is a Malaysian-owned restaurant with an all-Thai kitchen team that specialises in Thai street fare. The restaurant is set-up with colourful street food scenes on the walls, intended to give you the feeling of being on a Thai street but in the air con comfort of a mall. BBQ skewers are a highlight, showcasing a strong inspiration from the northeastern Isan region.
Taking a tour of the kitchen, we were amazed to see the division of labour – the staff specialise cooking only one (1) type of food – grill, soup and others like a true hawker stall should be. The kitchen was also squeaky clean and there’s also a hotel grade dishwasher which ensures that all the dining ware and cutlery are spotless.
This outlet is the second after the first one in SS2, Petaling Jaya and has a menu that doesn’t boast many items of food. This is intentionally done so that the quality of the food is emphasized instead of an outlet which features a huge variety of items but doesn’t specialise in any.

Mango Sticky Rice
The restaurant also has a value set for three (3) pax for just RM49.90.

My favourite was the Thai Green Curry which was fragrant, flavourful and rich!

Finally it was over to Eggu for dessert! Eggu serves soft serve ice cream, and crispy eggettes come in flavours such as original, choco chips, butterscotch, green tea, charcoal and banana. The signature creation is the “Eclipse”, a combo eggettes and premium soft serve ice-cream. The soft serve ice cream is creamy and not too sweet, while the eggettes add a nice variance in texture when eaten together with the ice cream.

Me on the left with the Eclipse (RM15.90) and Kate with the Twist (RM8.50) which is a combination of premium dark chocolate and milk chocolate

Besides the outlets above, there will also be Yummy Asia, Mad Hatter Desserts, and Stick Arts – Italian Artisan Gelato.

The stand up comedians are known in the local comedy scene and will have their first ever show at Atria.
Papi Zak
Papi Zak is definitely the “biggest” stand up comedian in Malaysia. Born in Egypt and raised in other different countries, he is the true definition of a third culture child. He is a gut-grabbing performer who has no qualms about opening his mouth and letting all manner of things fly out. It’s all these things that make Papi Zak one of the hottest comedians around.

Kavin Jay
Kavin, one of Malaysia’s most underrated comics, is a rapid-fire grumpy joke telling machine. He may be grouchy but does it with such panache, you can’t help but laugh. He is an integral part of the comedy revolution in Malaysia and a regular host and performer for TimeOut KL Comedy Thursday.

Jonathan Atherton
Jonathan, an actor, comedian, traveller and raconteur, is no newcomer to the entertainment industry. As a teenager he pursued an acting carer. He made his debut in The Mango Tree, then went on to play television and theatre roles.

Gajen, also known as “Malaysia’s First Chindian Comedian” is no stranger to the limelight, appearing in Monash University student magazine Monga, getting interviewed by Capital FM, and even having NTV 7 film a documentary about his career as a stand-up comedian.

So I bet that now you’re asking how you can get tickets to the show?
Shoppers who spend RM100 and above in not more than two (2) accumulated receipts are entitled to redeem two (2) free tickets to the comedy show. Redemptions can be made at the Concierge Counter located at the Concourse Floor, while tickets last. Comedy ticket holders will also stand a chance to win Atria Gift Vouchers worth up to RM5,000.

For more info on Atria Shopping Gallery’s Comedy and Food Fest 2016, head over to http://www.atria.com.my/whats-on/news-events/comedy-food-festival-a-belly-full-of-laughs.html